I am very happy to be participating for the second year in German Literature Month, hosted by Caroline of Beauty is a Sleeping Cat and Lizzy of Lizzy's Literary Life.

Today I am going to take a  look at the German Language short stories in Best European Fiction 2012, edited by Aleksandar Hemon.   The Best European Fiction series, began in 2010, is a very good way to read a diverse range of contemporary European short fiction from highly regarded authors, with great translators.   (The 2010 edition contains several selections from novels.  I personally find that an offensive practice and do not recommend the purchase of that year's edition.)

There are two stories in translation from German in the anthology.  One from an author from Germany and one Switzerland.  (I checked with Caroline to be sure that works from other countries could be included.)  Both authors are considered rising stars.

"The Woman with the Stocks" by Michael Stauffer  (Switzerland:  German)

I found Michael Stauffer's story "The Woman with the Stocks" initially interesting but as I read on I grew fatigued with it and was glad when it was over.   A variation of this line is repeated over and over:  "The woman with the stocks had managed for years not to think about the stocks".   This  expression appears 78 times in the 15 page story.   It is a story about how professional "financial advisers" cannot be trusted and the human cost of the financial crisis stalking Europe.   There is a twist ending but I did not much like it.   I was disappointed by this story. 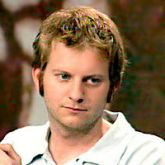 (Switzerland), born on July 20, 1972 in Zurich. At the University of Bern he studied German, French and Visual Arts. He is member of the Swiss writer’s association. He received many prizes and scholarships: Hermann-Ganz-Preis (2001), 12-month scholarship of the Academy Schloss Solitude (Stuttgart, 2001), 1st prize at the 7th open mike (Berlin, 1999) and many others.

"The Case of M." by Clemens Meyer (Germany)

"The Case of M." by Clemens Meyer is a pretty much standard story told from the point of view of a child molester, a killer and a rapist.   In my mind I called it "Post Bolano Fiction".  It is about  stalking a girl from school.   I thought at times the author was attempting to shock the readers with the depravity of the narrator, but instead I think this story will bore most people as it did me.  You can find this sort of story done much better elsewhere.   The author spent some time in a juvenile detention center and maybe that is where he got the inspiration for this story.   I admit that I do not like stories like this as a general rule so perhaps I overreacted. 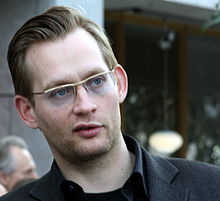 Clemens Meyer (born 1977 in Halle an der Saale, then East Germany) is a German writer. His studies at the German Literature Institute, Leipzig, were interrupted by a spell in a youth detention centre, and he has worked as a security guard, forklift driver and construction worker.
He won a number of prizes for his first novel Als wir träumten (As We Were Dreaming), published in 2006, in which a group of friends grow up and go off the rails in East Germany after the fall of the Berlin Wall. He received the Rheingau Literatur Preis in 2006. Die Nacht, die Lichter (All the Lights) was his second book, published in 2011 with And Other Stories (London). It won the Leipzig Book Fair Prize in 2008. Since then he has published his third book, Gewalten (Acts of Violence), a diary of 2009 in eleven stories.

I just got in Best European Fiction 2013, with a preface by John Banville.  There are no stories by German authors in the collection.  There is a story written by an author from Turkey, in German.

Too bad both the stories you read were below par. I have read hardly any German Literature and would like to try some short stories. Any recommendations? Also, have I mentioned I love Carmila?

There were a lot of reviews of Meyer's short story collection last year and I thought they sounded really good and I wanted to read them but now every time I pick up the book it makes me tired. I don't mind reading about ugly things but there must be some depth behind, if I feel the author just wants to shock and in a very used way at that - not for me. I totally understand your reaction.
And the story by the Swiss author sounds so mannered. I'm allergic to this type of gimmick.
I'm sorry there weren't any better stories ion this collection. There are such wonderful German short story writers. Try Judith Hermann.I think you would like her.

Che-the only German languages writers whose short stories I can endorse as Kafka and Thomas Mann-The host web pages for the German lit in November event have lots of suggestions.

Caroline-I feel more secure in my remarks on Meyer given you had the same reaction. I like darker stories and have posted on many of them but not ones that seem just to seek to shock us.