In Search of Ancient Ireland by Carmel McCaffrey

In Search of Ancient Ireland by Carmel McCaffrey (2003, 304 pages, non-fiction) 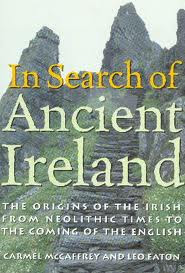 There are lots and lots of theories about why Ireland has produced so many great writers.   There is no one thing that can explain this but one contributing factor is often said to be the great many ancient artifacts found all over Ireland.   The author of In Search of Ancient Ireland says their is an old saying in Ireland that you cannot walk 100 meters without finding an ancient item.   This produced in the people of the Island a need to explain what these artifacts were and gave them a deepened sense of the magical underworld which stimulated their creativity and imagination.    I do not know whether this is a credible idea or not but I do like it!

In Search of Ancient Ireland by Carmel McCaffrey is a very good non-academic history work.   I found it very interesting and informative.   This is not a junk history book like the ones that try to say the pyramids were done by aliens.   It is a serious very respectful of its readers and its subject matter attempt to bring 10,000 years of Irish history to life without a lot of wild speculation.

He starts with an account of what life was probably like for the first Irish people who probably, here he is guessing based on the best information we have, McCaffrey tells us that, came by boat from England.   In the prehistoric sections the authors assumes, which makes perfect sense, that the Irish lived much like other people of the era from similar climates and he uses broader data to reconstruct their lives.

He talks about tombs of the Newgrange era-around 3500 BC and other remains.   He talks about Bronze Age stone circles and reconstructs trade routes.   He gives us some ideas on how the people lived.

I found the section on the Christianizing  of Ireland very interesting.   Unlike most large scale conversions, it was done in a non-violent fashion.   He does talk about the knowledge we have of St Patrick and goes into others involved in the conversion process.   The missionaries married pagan beliefs with Christianity to make it appealing.   He also talks about the very important role of monasteries and the invasions of the Vikings.  The Vikings came without women and they often ended up staying, marrying a local woman and adopting while still changing the culture.

McCaffrey explains the great importance to Irish history of the fact that the Romans never invaded Ireland.   The reason for this was largely because by the time Roman empire had reached England it was already in a sharp decline and did not have the resources to invade another Island.   This in a way helped the Irish monks to read a pure form of Latin and this is often said to be a contributing factor to their ability to preserve Latin manuscripts.

He also, of course, explains as best one can, who the Celts were and the Druids.

Ireland was never  during the period prior to the first invasion of the English a unified country with one ruler.   The island was relatively peaceful compared to many areas in Europe.

There is a lot in this book.    I am very glad I read it.  It is written in an engaging and entertaining style I enjoyed.

He does make remarks about Irish temperaments which some may find annoying and others endearing.   He did say one thing I found off when he talks about the change from a hunter gather society to an agricultural one in which he suggests these were probably competing tribes of people when the evidence and common sense that the same traits existed in groups of people.   People were mostly both, not one or the other as the author suggests.

There was a PBS American TV series based on the book.

The author has a second book In Search of Ireland's Heroes that covers from the invasion of the English in the mid-12th century up to 1920.   I am reading it now.