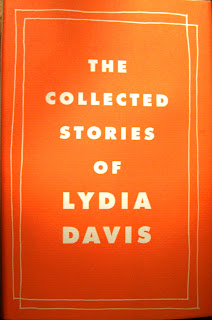 "Mrs. Orlando's world is a dark one"

Lydia Davis is a very highly regarded translator of Flaubert and Proust and has a very elite status among short story writers.    I have decided to read all of the stories in her collection, 200 of in all.   The longest is 40 pages and the shortest is two sentences.   I will post on a few of them and upon completion of the volume, it might take a month or it might take a decade as things have been going, I will post an overview of it. 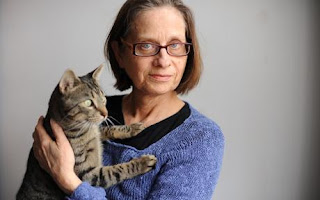 I first read her work in a collection of short stories from The Parisian Review.  I also read a in the same volume a commentary she did on another writer's story and I said I would love to take a class in the short story from her.

As I read "The Fears of Mrs. Orlando", set in contemporary New York City, I thought to myself, the American presidential elections just being over, here is a woman who for sure did not vote for President Obama and probably believes he was born in Kenya.

Mrs. Orlando, of course it also made me think of the Virginia Woolf novel and the city in Florida, is a mature woman with grown children.  She lives by herself in New York City.   She is afraid of everything.   Inside her house she has all the dangers marked out but once out of the house she is in a world of fear.  The biggest thing she is afraid of is black people.   She has a morbid near pathological fear of them.  Her grown children more or less humor her fears while trying to be as rational with her as they can.   In one really striking incident, she is out shopping with her daughters and she imagines a black man reached out from under her car and grabbed her leg.  It looks like this is a complete hallucination.

I liked both of these stories a lot and I look forward to working my way through the collection.


Please share your thoughts on the stories and translation of Lydia Davis with us.