I am looking for reading suggestion for contemporary Irish novels 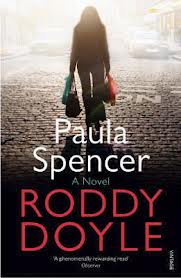 Paula Spencer is a sequel to The Woman Who Walked Into Doors, with eight years gone by.   (My post of The Woman Who Walked Into Doors is here.)   Paula's abusive husband has been dead for almost a decade now and she is still single.  Her four kids are growing up fast.   Her daughter has followed her footsteps into alcoholism and one of her sons is a heroin addict.  Paula has been sober for four months and five days as Paula Spencer opens.  The Celtic Tiger is riding high during this period.   One of Paula's old cleaning lady cohorts is now rich enough to buy a second apartment, this time one in Bulgaria.    Dublin seems to Paula to becoming over run with foreigners and shockingly to some black people.   We can see this kind of bothers Paula but she deals with it.   She still cleans houses and offices but she has become a supervisor at the service that cleans offices.   She is still a spectator into the lives of those better off than her by looking at their houses and offices when they are not home.   There are a lot of really telling class indicators in the novel.

It was sad to see her daughter headed down the same path as Paula and any parent can feel the heart ache of a son hooked on heroin who steals the family TV to feed his habit.  Paula still fancies men and even talks about them pretty frankly with her teenage daughter in which they discuss men they consider possible "rides".   She is a little worried one of her sons might be gay. (I have learned lots of new slang from Doyle's novel and I know now that if you want to offer to take someone somewhere in your car in Dublin, you do not say "would you like me to give you a ride?".)

I am trying to decide if I like Paula.   Being blunt, looks wise it sounds like she is not bad for her age, she is pretty smart, she never reads of course.   She seems to have preserved her ability to enjoy the pleasures of life.  She has a sense of humor.   She was over all a terrible mother but we can make excuses for her and we want to.   I imagined Paula cleaning our house and wondered what she thought.   She would probably say "I wonder if he really reads all these books and the three teenage girls seem a bit spoiled and the cats for sure are."   Maybe she wonders if we look down on her because of her long history of drinking and her family troubles.

For sure first read The Woman Who Walked Into Doors and if you like it, most people do, then read Paula Spencer.   Doyle has written two other trilogies and I bet there will be a third Paula Spencer novel.   I hope so and I hope she is OK.

Roddy Doyle is the author of nine novels, a collection of stories, and Rory & Ita, a memoir of his parents. He has written five books for children and has contributed to a variety of publications including The New Yorker, McSweeney’s, Metro Eireann and several anthologies. He won the Booker Prize in 1993, for Paddy Clarke Ha Ha Ha.
Roddy has written for the stage and his plays include Brownbread and Guess Who’s Coming For The Dinner. He co-adapted with Joe O’Byrne his novel The Woman who Walked into Doors and he co-wrote with Bisi Adigun a new version of The Playboy of the Western World.
He also wrote the screenplays for The Snapper, The Van, Family, When Brendan Met Trudy and he co-wrote the screenplay for The Commitments.
He lives and works in Dublin

While I love Roddy Doyle, and enjoyed The Woman who Walked into Doors I've never read Paula spencer. I probably will some day. My money is on Doyle giving her a happy ending.