30 Under 30:  A Selection of Short Stories by Thirty Young Irish Writers edited by Elizabeth Reapy with a foreword by John Walsh

"A magpie is as good as any bird.  Contrary to what they'd have you believe, the owls aren't the ones with all the wisdom".

There are thirty stories in 30 Under 30:  A Selection of Short Stories by Thirty Young Irish Writers.   (I totally endorse purchase of this very fairly priced collection and will provide a publisher's link at the end of this post.)   There is also a very interesting introduction  by the editor Elizabeth Reapy (I have posted on her very well done short story, "Statues") and a foreword  by John Walsh..   Agreeing with John Walsh, I think this book could well be a collector's item one day.

Upon completion of this project, I will list my top five stories. 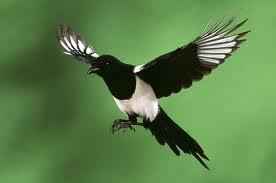 "The Magpie" by James O'Sullivan is a tremendously fun story with a touch of magic realism.   It brought to my mind the stories of James Stephens and Seamas O'Kelly.   O'Sullivan's story resonates more than the other stories do in ancient Irish folkways.   The Magpie, a bird widely distributed in Ireland, the Uk, and Europe,  has many ancient associations.   Seeing a lone magpie is said to be bad luck unless one greets the magpie by saying some thing like "How is are your wife and family, Mr Magpie?"   If a magpie looks you directly in the eye it means he does not intend you harm and is inviting conversation.   According to an old English folk tale, when Jesus was crucified all the birds wept for him but the magpie who mocked him and ever since then the magpie has been cursed as a causer of bad luck.   In Ireland and Scotland a magpie at the window was seen as a harbinger of death.

"The Magpie" is also old fashioned in its narrative mode as it is a story told by the narrator.   The narrator's father is from Indonesia and his mother is from Dingle, Ireland.  People call him "a Paki", an ill-mannered slang term for someone from Pakistan.   The family has moved around a lot because of the nature of the father's work, a high end occupation of some sort.   He likes living around educated people because they do not call him a "Paki" all that much.   One day at school the physical education teacher asks him if plays hurling ((I admit I did not know for sure what this was until I Googled it)   He tells the teacher he would rather enroll in an art class and the teacher says any proper manly lad does hurling.  The suggestion is that you don't hurl then, to quote the story, you are a "faggot".  I admit I laughed to think "hurl" in American English slang means to throw up after heavy drinking.

The narrator is sitting on a bench at his school doing so art work when he looks over his shoulder and sees a solitary magpie.  The magpie starts talking to him.  He tells the man it is OK to sketch him.   The man and the magpie then begin to engage in conversation.   I really liked the conversation, it was totally brilliant and the magpie, "Sorrow" was his name, really did sound wise, if very cynical.  The man knows he may be hallucinating but the bird convinces him he is not.

This was a really great story, totally fun to read and the remarks of the magpie were just tremendously sharp.

The author is a native of Cork.   His first collection of poetry, Kneeling on the Redwood Floor, was published in 2011.  He has published in numerous periodicals.

You can find more about his work on his webpage

I hope to read more of his stories soon.

You can find more information on 30 Under Thirty:  A Selection of Short Stories by Thirty Young Irish Writers at the web page of Doire Press.

Mel - sincerest thanks for your kind words. Glad to hear that you enjoyed my story.

All the very best,
James