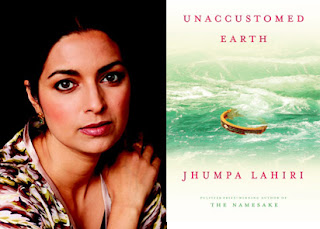 My Prior Posts on Jhumpa Lahiri

Jhumpa Lahiri (1967) won The Pulitzer Prize for her debut collection of short stories, The Interpreter of Maladies in 1999.   Her first novel Namesake, was made into a movie.   Many of her devoted readers say that the stories in her 2008 collection of stories, Unaccustomed Earth show a significant advance in quality and depth from her first collection.  (There is some background information on Lahiri in my prior posts on her work.)

Lahiri is a second generation Bengali Indian American.   Most of her stories focus on similar people.   All of the people in her stories I have so far read, with one exception, are driven to succeed high achievers dealing with the struggles to fit in a new society without losing your cultural heritage.   Her stories also focus on the conflicts of parents and their adult children.   Almost all of the parents had arranged marriages and it is hard for them to accept that their children will find their own spouses.

The title story in the collection, "Unaccustomed Earth" is one of her longest stories.   The central characters are a seventy year old widower born in Calcutta and his thirty something daughter, a law school graduate, who lives in Seattle and is married to an American hedge fund manager who dotes on her but is rarely home. They have one child and she is now pregnant.   The father, who lives alone on the east coast of the USA, comes for a visit.   The daughter knows that Indian custom requires that he be invited to live with them.   Her husband says it is fine.   The father has spent his retirement years going on tours and he has met a Bengali woman, sixty five and he has formed a relationship with her.   The characters are wonderfully realized.

Part of the story is with the problems people have of letting go of the memories of their childhood and the dynamics that can emerge when an adult child things his or her parents needs help to live.   It is also about the guilt that those whose spouse has died feel when the do form other bonds.

This is a very rich story with lots of great small details.   The people in the stories of Lahiri are very intelligent but they use their intelligence in such subtle ways that it is not always easy to see it.

I loved this story and looking forward to reading all of her work.

I've read many of her books and she epitomises so beautifully the issues faced by second generation immigrants - trying to balance a world of conservative culture and what is staring them in the face right now. This sounds an amazing read.

I'm glad you reviewed this. Unaccustomed Earth is my all time favourite, considering I don't like Short stories that much.
I read the whole collection. Then bought the book. I'll re-read it one day.