"The Beggar Woman of Locarno" by Heinrich von Kleist

My Prior Posts on German Literature

I am very happy to be participating for the second year in German Literature Month, hosted by Caroline of Beauty is a Sleeping Cat and Lizzy of Lizzy's Literary Life.   There are all sorts of great reading suggestions and links to wonderful posts on their blogs.   This is just the kind of event that shows the real greatness of the international community of book bloggers. 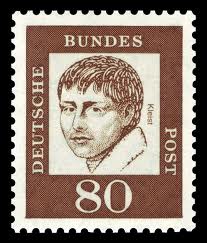 Heinrich von Kliest (1777 to 1811, Frankfurt, Germany)  is a writer of novels, philosophical essays, plays, poems and lots of short stories.  (There is a good basic article on him here)   He was one of the primary figures of German Romanticism but he often subverted the cliches of the movement.   My limited research indicates it is his short stories that are most still read in English.

"The Beggar Woman of Locarno" (translated by E. K. Bennett-my publication date is a guess-if you know the publication history of this story please leave a comment) is a very well done fun to read ghost/haunting/horror story in which a spectral figure takes revenge for the cruelty a wealthy man did to an old beggar woman.   Here is the gist of the story:

The Marquis, returning from the hunt, happened to enter this room, where he usually kept his guns, while the old woman lay there, and angrily ordered her to come out of the corner where the bundle of straw had been placed and to get behind the stove. In rising the old woman slipped on the polished floor and injured her spine severely; so much did she hurt herself that only with unspeakable agony could she manage to cross the room, as she was ordered, to sink moaning behind the stove and there to die.
Some years later the Marquis, owing to war and bad harvests, having lost most of his fortune, decided to sell his estates. One day a nobleman from Florence arrived at the castle which, on account of its beautiful situation, he wished to buy. The Marquis, who was very anxious to bring the business to a successful conclusion, gave instructions to his wife to prepare for their guest the above-mentioned room, which was now very beautifully furnished.
But imagine their horror when, in the middle of the night, the nobleman, pale and distracted, entered their room, solemnly assuring them that his room was haunted by something which was not visible, but which sounded as if somebody lying on straw in one corner of the room got up and slowly and feebly but with distinct steps crossed the room to lie down moaning and groaning behind the stove.

The mistress and master of the house decide to spend a night in the haunted room.  The results are not surprising but von Kliest tells  them in a great way.  If the story seems like a cliche to you, remember it was writers like von Kliest that helped set the form of the horror and ghost story for writers from all over the world.

You can read the story at the web page of Virginia Commonwealth University on 19th Century German Short Stories.   Their webpage is a great resource as it has stories in English and German by many of the great 19th century German writers including Goethe, Schiller, Novalis and E T A Hoffmann.    I hope to post on a few more 19th century German short stories for German Literature Month.