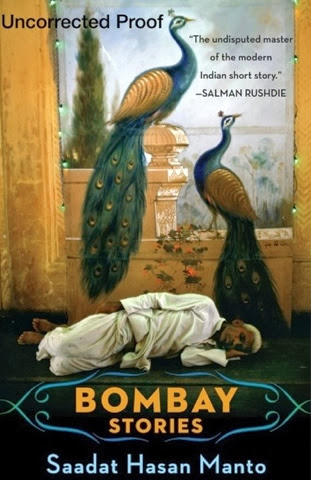 In his very interesting afterward to a forthcoming collection of short stories by Saadat  Hasan Manto (1912 to 1955) Matt Reeck credits Manto as the first author to focus on the dark side of Bombay (now known as Mumbai) in his stories about thugs, prostitutes, slum dwellers, Bollywood writers, and the rural immigrants who made up eighty percent of the populace of Bombay in 1948.  He also wrote extensively on the catastrophic results of the partition of the Indian subcontinent into two countries.  Novels about the reality behind the glitter of modern India mega-cities have won or been short listed for the Booker Prize.  His work reminds me of the great Yiddish language writer Lamed Shapiro who wrote stories of the pogroms against Eastern European Jews.  It is almost as if Manto broke the ice and a great out flow of pain resulted in literature of great depth.  On a side note, in my post on Manto's short story "Mozelle" I was in a quandary as to why Manto choice to make the central figure in the story a Jewish woman.  From Reeck I learned that there were extensive Jewish communities in the Bombay area since 1600.
One side effect of the migration of poverty stricken people to Bombay, the majority of immigrants were men, was a great expansion in the number of prostitutes.  Whole areas of the city were given over to prostitutes and many women did it as a side line.  For various complicated reasons, prostitutes were often from the Dalit (Untouchable) castes and their pimps and gangster overlords were from higher castes.  There is no sense of condemnation in Manto's story.  He is just portraying life.
Khushiya is a pimp.  However, he personally at age twenty eight had had it seems no sexual contact with women.  Religious and caste taboos kept him from touching the prostitutes.  In fact before the day of the story, he last saw a naked woman when he accidentally got a glimpse of a woman in the shower at age ten. Today he decides to go check on one of his charges.  He does not think she is home so he walks into her apartment.  To his shock, she is all but naked.  He is grossly insulted when she makes no effort to cover herself, as if her were a cat, not a man.  He takes an extreme step to prove his manhood, nothing violent but actually I liked how it ended a lot and thought Khushiya had for sure resurrected his manhood.
For sure Manto's stories are very powerful, the best can stand with the greatest of short stories.
There are fifteen stories collected in Bombay Stories (I was given this book by Viking International and offer my thanks.)  For sure I will read them all.
Please share your experience with Manto with us. (There is background information on him in my prior posts on his stories)
Mel u

Even I think so. After reading Khushia, wanted to know what could have happened ... And I am sure it must have went well in favor of both.

I actually couldn't get the point of picking up Kanta from her home? Can you share
your kind of ending to this?