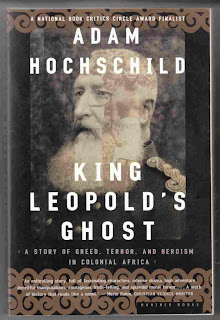 I have wanted to read Adam Hochschild's (1943, USA) account of the terrible exploitation by King Leopold of Belgium of the Congo for some time and I was very to happy to see it was now available in my preferred reading mode, as a Kindle book.   The story told in this book is a horrible one.   I will not repeat the history of the colonial rule of the Belgium Congo  other than to say about six million  people died just to make a King Leopold very rich (several billion in contemporary dollars).   The slaughter was simply beyond easy comprehension.   European employees of the companies owned by the King often shot locals just for sport and horrible methods were used to make them collect rubber and ivory.   Leopold personally owned the Congo and cheated his own country in the process.

King Leopold (1835 to 1909-King from 1865 to his death) always tried to tell the world, through a lot of vehicles, some were paid writers and others just fools, that he was wanted to rule the Congo (he never went there) in order to keep Arab slavers from capturing the people.  He played on the racism of Europeans to portray the Arabs as monsters and the Africans as children in need of protection.   There is a lot of fascinating data about  European politics in the book.    Belgium does not come through looking very well.

King Leopold emerges from the book a horribly despicable person and a one man argument for the abolition of royalty.  He hated his wife, hated his three daughters.  He spend huge sums on absurd palaces and public works and even  more on the 16 year old prostitute he made his mistress.  His upbringing, which is not talked about in the book, must have been very dysfunctional as his sister, who was at one time the Empress of Mexico, spent about 50 years locked up in a palace in Belgium still thinking she was in Mexico.   He liked young girls, 10 to 15 and had them imported from England.   He got in trouble for this and bought his way out.   You will leave this book hating him.

Hochschild also talks about the life of people like Henry Stanley who helped open up the Congo to white rule (famous for allegedly saying "Doctor Livingston, I presume) and goes into a lot of detail about people who tried to expose what was going on in the Congo.

This is an ugly story.   King Leopold might have been the worse villain but he was far from the only one.   African chiefs sold their own people as slaves and gladly captured those of opposing tribes for bounty to become rubber workers.   Many many left Europe to go to the Congo in search of big money and the ability to be feudal masters.   African women were used as sex slaves.

Hochschild makes some interesting connections.  It was the creation of the rubber tire in the United States by B. F. Goodrich that lead to the huge demand for rubber (rubber plantations were about a decade away at this point in history) that lead to the extreme demand for rubber which lead the workers in the Congo to be killed in the millions in order to "motivate" them to meet demand.   Hochschild does a brilliant job in letting us see just how the rubber farming and collection system worked.

Hochschild does not tell his story in isolation.  He relates it to the other terrible holocausts of the 20th century.   He suggests it is less thought of because the victims were Africans and it is hard to argue with this.

The exploitation of  residents of the Congo continued after the death of Leopold.   During WWII people were forced to mine uranium (and were killed for not working hard enough) and 80 percent of the uranium used in the Hiroshima and Nagasaki bombs came from a mine in the Congo were slackers were shot.  He also talks about The Heart of Darkness in a very illuminating if not entirely accurate way.

If you are interested in Colonialism, the history of Africa, or have any romantic notions about European royalty, you need to read this book.  There is a lot in it I have not covered including a story about a very brave Irishman.   Queen Victoria was a cousin of Leopold's.

This is a great book, both for how it is written and for the forgotten story it tells.  There is also a 2005 end note in which the author talks about  reaction to the book.

Mel, I have heard much about Belgium Congo and the other colonialists who ruled Africa but nothing compared to what's depicted in Hochschild's book. I didn't know colonial rule was this brutal and inhuman in parts of Africa.

I've been looking for such a book for a while now (I live in Belgium), so thanks for pointing it out!