"I write it out in a verse -
MacDonagh and MacBride
And Connolly and Pearse
Now and in time to be,
Wherever green is worn,
Are changed, changed utterly:
A terrible beauty is born."  from "Easter, 1916" by W. B. Yeats 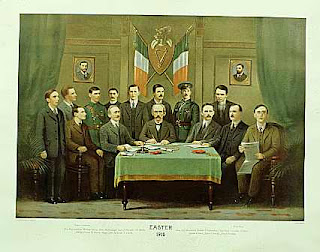 Other than great famines of the 19th century, no other historical event is as important in understanding Irish history than the Easter Rebellion of 1916 against  British rule  It  began on Easter Monday March 24 and ended in brutal suppression seven days later.    It was the most important revolt against British rule since 1798.  Sean McMahon, a well known writer of popular history, does a good job of letting a neophyte in Irish history such as myself see how important this seven day event was for setting a course that would lead to Irish independence.   He explains very well the various political factions fighting against the British and each other. An outsider to Irish history is going to have a hard time understanding the deep bloody hatred the Protestants and Catholics have for each other.  Once you educate yourself a bit the reasons are clear and my sympathies are with the Catholics (which I am) but without some knowledge it seems a very irrational attitude.

The seven day conflict was very bloody with horrible cruelty on each side.   The revolution was suppressed in seven days and the leaders were mostly executed.   Its lasting legacy was to awaken an acceptance of extreme violent attacks on the British and their supporters, real or perceived which did lead to Independence for all but the largely Protestant six counties of Northern Ireland, which did not want to leave British rule.

McMahon helped me to understand this period of Irish history and I recommend his book.   It is popular history without a lot of documentations but I always felt the author knew what he was talking about.  He avoids demonizing the British or turning the Irish leaders into saints.

You can hardly understand Yeats or Joyce if you do not understand this period of Irish history.


Please provide me with your suggestions as to best Irish history books, hopefully books in kindle format.

Valerie-thanks very much for these suggestions-I checked both of these books on Amazon and they have kindle editions. I will start with Occasion for Sin