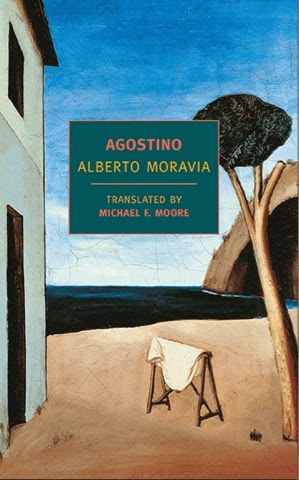 Recently I read for the first time works by two of the aristocrats of post World War II Italian literature, Curzio Malaparte and Giuseppe Lampedusa.  I am very pleased to have now added to this list Alberto Moravia.  All were deeply cultured and highly influenced by Fascism in Italy.
Agostino, first published in 1944, it was completed in 1941 but Italian censors did not allow its publication until 1944.  It has been newly translated by Michael Moore and will shortly be published by The New York Review of Books. It is a powerful story of Oedipal conflict and class markers.  The story centers on a thirteen year old boy spending time at a seaside resort in Tuscany with his recently widowed mother.   He and his mother at first are totally caught up with each other, then the mother meets a young man and starts what appears, we see it through the confused eyes of the son so we are not sure what the relationship is, to be a romance with him.  The boy at this point is innocent sexually. He does sense the attractiveness of his mother and he greatly resents the interloper. The boy is from a well of family.  He meets at the resort a group of lower class boys, toughs, run by a sinister man with six fingers, a Fagin figure who might we end up thinking be a child molestor.  The world these new boys live in is very new to the boy.  He is bullied by them and comes to understand elements of class in  society.  The other boys tell him about sex and basically say his mother will sleep with anyone who asks.  The boy cannot relate sex to his mother though he sees her in increasingly sexualized terms.  Of course he is very emotionally conflicted. Older movie goers are going to come up with Gina Lola Brigida images from the descriptions of the mother.
Agostino is a very good, psychologically acute novel. The location in Tuscany is brought brilliantly into the work.  Some characters are not well realized but that is because we seem them through the eyes of the boy.
This work very much reminded me of Yokio Mishido's The Sailor Who Fell From Grace With the Sea. 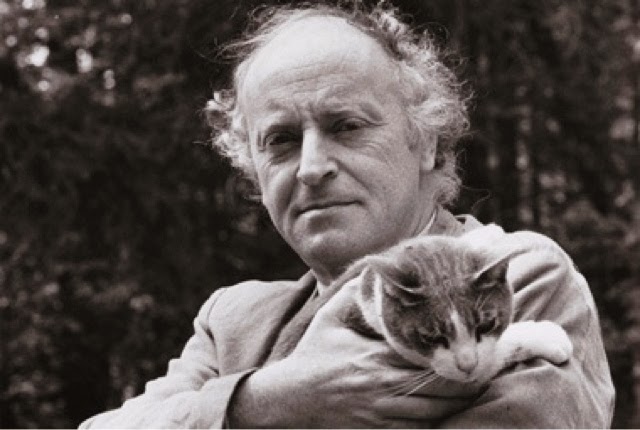 Alberto Moravia (1907–1990) was one of Italy’s greatest twentieth-century writers. Among his best-known books to have appeared in English areBoredom, The Woman of Rome, The Conformist (the basis for Bernardo Bertolucci’s film), Roman Tales,Contempt (the basis for Jean-Luc Godard’s film), andTwo Women.

Michael F. Moore is the chair of the PEN/Heim Translation Fund. His translations from the Italian include, most recently, Live Bait, by Fabio Genovesi,The Drowned and the Saved, by Primo Levi, and Quiet Chaos, by Sandro Veronesi. He is currently working on a new translation of the nineteenth-century classic, The Betrothed, by Alessandro Manzoni.  (From web page of the publisher)

The Sailor Who Fell From Grace With the Sea is an excellent, surprising book, so the comparison is intriguing. I'll have to keep an eye out for this one.

Moravia is one of the big names of post war Italian fiction, but another writer in a similar vein is Natalia Ginzburg who recreates the social realism and illusions of post war italy in a very convincing way. But, on a completely different tack, Italo Calvino is for me the greatest Italian writer of the 20th century