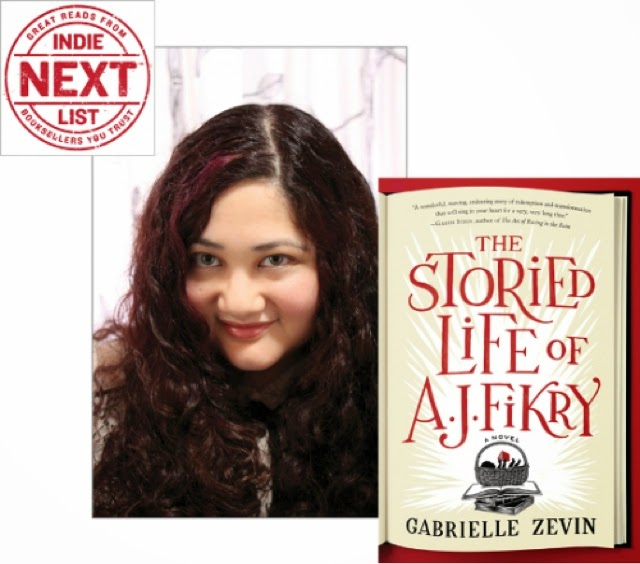 The Storied Life of A. J. Fikry by Gabrielle Zevin  is a perfect match for the announced long ago theme of my blog, literary works about people who lead reading centered lives.  To make it even more a treasure, the central character Mr. A. J. Fikry owns a quirky seen better days independent book store on a resort island and he loves above all else, short stories.  He lives above the store. He is a childless widow, his wife was killed two years ago in a senseless accident.  His priceless first edition of a work by Edgar Alan Poe, worth enough to allow him to retire, has been stolen.  Two things happen that will change his life forever.  One day a two year old baby girl, Maya, is left at his store, abandoned by the mother who leaves a note saying she things a book store would be a good place for a child to grow up.  Fikry is kind of irrascible, does not take readily to change, but he decides to adopt Maya.  He also meets Amelia, a book company representative when she calls on him to present her publishers new works.  At first he is irritated that his old rep has died but gradually they develop a relationship.  The novel covers a lot of years and it is fun to see Maya grow up around the store.  Fikry does not just read short stories, he frames his life experiences within them. Maya has begun in her middle teens to write stories and when she is in a sluggish period her father offers some reading ideas.
Here are some stories he recommended to Maya 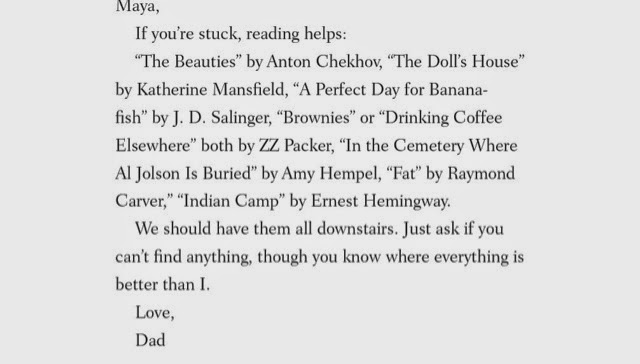 Lots of interesting, some uplifting and some tragic happen in the book.  Mysteries are unraveled, old crimes solved, somethings get better some worse.
As I read The Storied Life of A. J. Fikry I was, as I saw the character of Mr. Fikry develop and show a softer sued maybe he did not know he had, I was reminded of the development of the lead character in Silas Marner by George Eliot brought about by his adoption of an orphan.
I greatly enjoyed this book and I recommend it to anyone who loves books about people who love reading books about bookish people  and book stores.  I learned a lot about the challenging life of an independent book store owner from this novel.

Gabrielle Zevin’s debut, Margarettown, was a selection of the Barnes & Noble Discover Great New Writers program. The Hole We’re In was on Entertainment Weekly’s Must List and was a New York Times Editor’s Choice. Entertainment Weekly wrote, “Every day newspaper articles chronicle families battered by the recession, circling the drain in unemployment and debt or scraping by with minimum-wage jobs. But no novel has truly captured that struggle until now.” Publishers Weekly called the novel “a Corrections for our recessionary times.”

Of all her books, she is probably best known for the young adult novel Elsewhere. Elsewhere, an American Library Association Notable Children’s Book, was nominated for a Quill Award and received the Borders Original Voices Award. The book has been translated into over 20 languages. OfElsewhere, the New York Times Book Review wrote, “Every so often a book comes along with a premise so fresh and arresting it seems to exist in a category all its own… Elsewhere, by Gabrielle Zevin, is such a book.”

She is the screenwriter of Conversations with Other Women (Helena Bonham Carter, Aaron Eckhart) for which she received an Independent Spirit Award Nomination. In 2009, she and director Hans Canosa adapted her novel Memoirs of a Teenage Amnesiac (ALA Best Books for Young Adults) into the Japanese film, Dareka ga Watashi ni Kiss wo Shita. She has also written for the New York Times Book Review and NPR’s All Things Considered. She began her writing career at age fourteen as a music critic for the Fort Lauderdale Sun-Sentinel.

Zevin is a graduate of Harvard University. After many years on Manhattan’s Upper West Side, she recently moved to Silver Lake, Los Angeles.

In the Age of Love and Chocolate, the latest in the the saga of Anya Balanchine, will be out October 2013.

Seen this all over the blogs. Thanks for the reviews.