"To The Hills" by Kevin Barry - from There Are Little Kingdoms: Stories (2007) 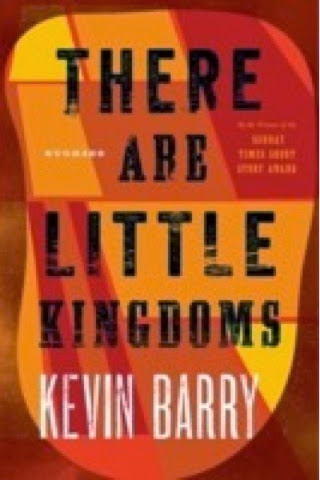 Kevin Barry (1969) is one of Ireland's most admired contemporary short story writers.  He has published two collections, Dark Lies the Island and There Are Little Kingdoms.  "To the Hills" is the second story in There Are Little Kingdoms.  Much of contemporary Irish literature can, I think, be read as a gloss on Patrick Kavanagh's magnificent poem, "The Great Hunger".  One of the themes of that poem, and many Irish novels and short story is that of men, mostly, and women who are emotionally isolated, with little or no intimate contact with the opposite sex.  Rural Ireland is depicted as a culture of old virgins, men waiting for their parents to die before they can marry.   Women were up until not to long ago sometimes put in mental hospitals for sex outside of marriage.  Sex out of wedlock was a terrible sin.
"To the Hills" is a story about a man in his early forties, he has had no intimate contact with a woman for fourteen years, and two never married women about the same age.  They met at a hiking club.  The women went their hoping to meet men.  The man is healthy and has a decent job working at a lab so the women reckon him a decent catch.  They decide to go on an overnight walk in the hills, stopping, each with their own room, at a B and B.  The man ends up naked in bed with one of the women but it has been so long that things just don't work right.  The interplay between the two women is very interesting and opens more questions than it asks. The man suggests that she and the woman try again, whoing her with these romantic lines "I am not afraid to get on the horse again".
I look forward to reading all the rest of the stories by Barry in this collection.
The Paris Review has a fascinating interview with Barry.
http://www.theparisreview.org/blog/2013/11/12/jumping-off-a-cliff-an-interview-with-kevin-barry/
Please share your favorite Barry works with us.
Mel u