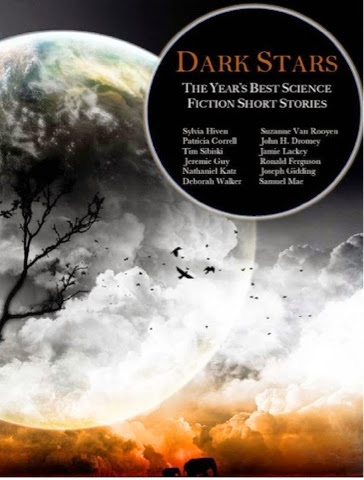 I have not read a lot of science fiction since I began my blog.  I used to read a good bit of it several decades ago.  Today I want to post on three interesting stories by female authors included in the anthology Dark Stars - The Year's Best Science Fiction.  Speaking just about the editing job of this anthology, there are several things wrong with it.  The biggest flaw, and it is really a major one, is that the table of contents includes only the names of the stories, not the author's names.  Secondly, you have to kind of guess what year the collection represents.  There is no introduction, no editor is named, we have no clue if these stories were published somewhere else first or if they were written for this anthology.  We have no idea why these stories can claim to be among the best of a year other than the fact they are in this collection. All in all a poor editing job. These flaws are enough for me to say do not buy this collection.  (I received a free copy of this book through a service.  When I tried to go to the publisher's web page, it no longer existed.)   There are legitimate juried best science fiction anthologies out there more deserving of your money.
I decided to post on female authored stories as the vast majority of science fiction is written by men, this is geek lit.  Overall the stories rely on a clever idea played out in an alternative universe, often with a surprise ending.  The level of the prose aims for a quick read but is not bad.  These stories are meant to entertain.  They are escapist reads.   They  deal with the consequences of the degradation of the earth.
"Ghost Nebula"
By Deborah Walker
This very brief story centers on a woman piloting a space ship through the ghost nebula while the rest of the crew sleeps in a frozen type state (a very common science fiction device).  We learn that she is 1000 light years from the "Shangai Factory Slums" where she grew up.  As the story ends, she is looking forward to seeing her mother.  Ok, sixty seconds to read this.  First thought was why does the author make reference to Shangai factory slums.  What is this meant to tell us about the future?  Or is this story just kind of pointless light entertainment?
"Killing Jar Captives"
By  Suzane Van Royon
This story starts out on an alien space ship, taking human captives back to the home planet of an insect like species that has conquered the Earth.  The captives are in jars, with an alien creature tapped into their psyche draining their life experience.  All of a sudden the ship hits a very bad meteor storm and ends up crashing to a planet, not earth.  There are four survivors, one is a man, one a woman and two are some kind of alien entity, not sure of the ontology here, connected to the humans. When the man called the woman "Eve" I winched.  Some decent descriptions of the conditions on the transport ship help make this an interesting story.
"Christmas Eve in New London"
By Patricia Correll
"Christmas Eve in New London" takes place somewhere in the galaxy that many residents of London migrated to when London became, due to horrible pollution and habit destruction, became virtually unfit for human habitation.  It has been six years since the residents moved to New London.  Since they got there no children have been born alive.  At first women gave birth to corpses but for a long time no one has gotten pregnant.  A disease killed all residents of New London under 14 or so.  The story centers on a man who, every Christmas,manufactures and
delivers replicates of children.  He picks up last years models, this years are just a bit bigger and developed.  Everyone on his route is happy to see him.  In an touch I found intriguing, he has programmed his replicants to always believe in Santa Claus.  This was the story of the three I liked the most.
All of these stories seem to be a bit clichéd.  All basically have one idea.  There is little or no character development, the plots don't really interest you that much.  Ok good entertainment reads and maybe I am too demanding.
Mel u