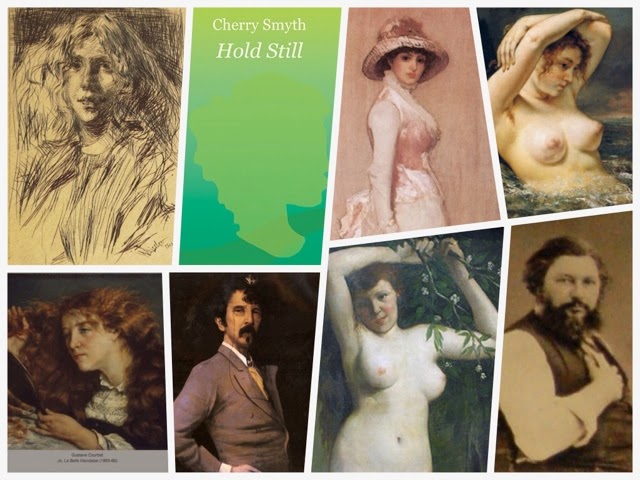 Hold Still is a marvelous intellectually superb and sensuously rich novel, by Cherry Smyth, based on the painter and artist model, Jo Hiffernan (1843 to 1903).  Jo was born in Ireland and she with her parents left the country while she was quite young to seek refuge from the famine in London.   She dreamed of being an artist.  She was an outstanding beauty and soon got offers to work as an artist's model, hence the title Hold Still. Her strict Irish mother gave her permission to pose only if she kept her clothes on.  You can see in my strictly educational collage, how that worked out.
She was the model, mistress and muse for the American painter, James Whistler (1834 to 1903).  The novel shows us that Whistler wanted to keep his relationship with Jo secret from his wealthy mother.  She also poses for the French artist, and fell in love with the beauty of France, Gustave Courbet (1819 to 1877).  Courbet painted, for a rich Turkish pasha, images of Jo meant to be, for the time, forbidden erotica.
Smyth lets us see how Jo was exploited, used for sex and low paid model work by men who thought themselves way above an Irish woman who posed nude.  We learn a lot about the business side of the high end art world in London an Paris.  We see Jo develop as an artist herself.  We see the traumas of Whistler and Courbet, Jo is as much nanny as mistress at times.  We see how hard it was for a woman to be taken seriously as an artist. We get a good feel for what sleeping with Jo was like and we do like the idea of it.
Holding Still is a very interesting, meticulously well researched book, rich in details about the art world.   It is first rate literary historical fiction. I recommend it without reservation to all.
Smyth has kindly allowed me to publish two of her short stories.
She completed a very informative Q and A Session during ISSM last year.
http://rereadinglives.blogspot.com/2013/07/cherry-smyth-question-and-answer.html 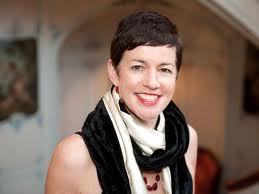 Cherry Smyth is an Irish poet, born in Ballymoney, County Antrim and raised
in Portstewart. She has written two collections of poetry, a poetry pamphlet as
well as a book, essays and reviews on contemporary visual arts. She has also
published short fiction.  Her debut poetry collection, 'When the Lights Go Up'
was published by Lagan Press, 2001. Her anthology of women prisoners'
writing, 'A Strong Voice in a Small Space', Cherry Picking Press, 2002, won
the Raymond Williams Community Publishing Award in 2003.  A poetry
pamphlet, 'The Future of Something Delicate' was published by
Smith/Doorstop, 2005. A second collection called 'One Wanted Thing' (Lagan
Press) appeared in 2006.
Her poems have been published in 'Breaking the Skin', an anthology of Irish
poets, Black Mountain Press, 2002, the Apples and Snakes Anthology,
'Velocity', 2003, 'Magnetic North', The Verbal Arts Centre, 2006.
You can learn much more about her work on her very well done web page.
http://www.cherrysmyth.com/about.htm
I hope to read much more of her work.