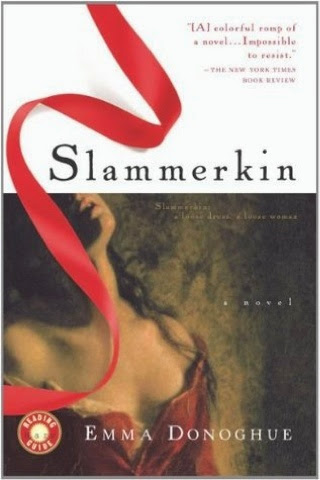 Emma Donoghue is one of Ireland's leading authors.  I have previously read and posted on her novel about an Air India hostess, Landing, and several of her short stories.  Slammerkin is a first rate work of historical fiction set in England around 1750.  It is the life story of of a girl, Mary Saunders, who began working as a prostitute in the very mean streets of London at age fourteen.  For her first trick she was paid a bright ribbon.  Donoghue does a great job of bringing the nightmarish streets of London to life for us.   Mary is thrown out of her home by her mother when she finds out she prostituted herself.  On the streets at fourteen, she had only one real option, sell herself.  The clientele are universally brutal. Most sex acts take place leaning against a wall or in some horrible venue. Oral sex is considered very outrageous.  Clients concerned about venereal disease sometimes opt for hand jobs. Mary develops total contempt for men.   In one very amusing scene she encounters James Boswell and Samuel Johnson.  Boswell tells her maybe later and Johnson advises her to quit the streets.  She soon meets a older girl, Doll, who shows her the ropes.  The girls drink as often as they can, mostly the cheapest gin, rob their customers, and live really for hour to hour.  One bad thing after another happens.  Venereal disease is the scorage of the streets, no aids yet.  Some drives Mary out of London and she becomes a servant at a family her mother knew long ago.  More terrible things happen.
There is a lot of violence and nasty sex.
This is a grim novel, the streets are filthy and dangerous, men are animals, women are all in the world view of Mary, basically whores, some are just better paid.  There is terrible cruelty in this world.  Nothing good lasts.
Slammerkin is first rate historical fiction.  Donoghue has written two other novels set in  18th century
England and I hope to read them one day.  This is a grim work with no uplifting features.

Mystica,
It is a very grim read for sure. Thanks as always for your thoughtful comments