“Cliffs of Fall” - A Short Story by Shirley Hazzard 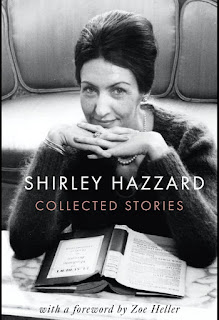 Previously this Month as part of my partcipation in The Aussie Author Reading Challenge I posted on “The Party” by Shirley Hazzard.

My Prior Posts on Shirley Hazzard

1963 to 1994 - Married to Francis Steegmuller - A highly regarded Flaubert scholar (They met at a party hosted by Muriel Spark in New York City.)

““We should remember that sorrow does produce flowers of its own. It is a misunderstanding always to look for joy.”  -Shirley Hazzard

“Much of the drama in Hazzard’s work arises from the bruising interactions between those who are responsive to beauty, and those who are not.”  Zoe Heller in her Preface to The Collected Short Stories of Shirley Hazzard .

“Including twenty-eight works of short fiction in all, Shirley Hazzard’s Collected Stories is a work of staggering breadth and talent. Taken together, Hazzard’s short stories are masterworks in telescoping focus, “at once surgical and symphonic” (The New Yorker), ranging from quotidian struggles between beauty and pragmatism to satirical sendups of international bureaucracy, from the Italian countryside to suburban Connecticut. “. From The Publisher.

I have so far read one novel by Shirley Hazzard, The Great Fire plus  nine  short stories.

Here is my reaction to The Great Fire

The great fire refers, among other things, to the destruction of the traditional culture of Japan in their defeat in World War Two.  Set in 1947, mostly in Japan and Australia, the people in the novel are trying to get on with their lives now that the war is over.  Some of the men were badly wounded, all suffer mental trauma, parents struggle to understand why their son had to die.  The great fire is also, mentioned several times, a symbolic representation of the bombing of Hiroshima.

“Cliffs of Fall” is set in a Villa outside of Geneva with a magnicient view of the Jura Mountain range.   Elizabeth Tchirikoff, six weeks a widow, is staying with her friends Greta and Cyril, trying to deal with feelings she never had before. Hazzard’s prose is exquisite.

In the World depicted in Hazzard’s Short stories i have so far read we see a Love for beauty, a post war venue in which people of course have servants.  Her people read serious European literature.  There is no material misery, no food anxiety.

As  the story progresses we follow Elizabeth Tchirikoff through various stages of grief..

This line of Observation at the Geneva AirPort struck me as  pure Hazzard:

“An elegant woman walked past with a poodle on a leash.”

I still have 22 stories to go in The Collected Short Stories of Shirley Hazzard I am looking forward to reading.