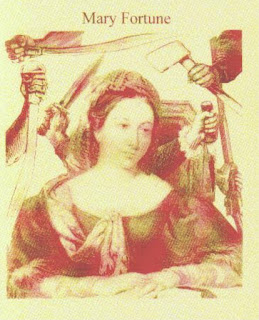 She Moved to Melbourne in 1855

Author of over 500 detective stories

The Irish first came to Australia as convicts (many transported because of their active opposition to English rule),  then in massive numbers during the famines. Some arrived as children and grew up in Australia.   At one time nearly 25 percent of the population of Australia was descended from people from Ireland.   Irish Australians went on to be the best of everything, they founded the country and set it free,  including the writers of Australia.   The conditions that caused the short story to be more popular than the novel in Ireland were found in Australia after 1850.

Mary Fortune (1833 to 1910-born Belfast, Ireland-emigrated to Melbourne, Australia 1855) is a fascinating figure, both as a person and a writer.  For over 40 years she wrote  serialized detective stories that appeared in The Australian Journal from 1868 to 1908.  She always wrote under a pseudonym, normally as "The Wandering Waif" or "W. W."  She wrote and published over 500 detective stories.   She married twice, leaving her first husband behind to follow her father who had moved  earlier to search for gold in Australia.

The Australian Journal guarded her privacy and kept even her death from the public (the exact date of which and the location of her grave remains unknown). The Journal, curiously, also paid for her funeral in another person’s grave. It was only through posthumous research in the 1950s by J. K. Moir  (a collector of early Australian literaure) that her real identity was discovered, and only then through the lucky discovery of a letter signed ‘M. H. Fortune.’ “The White Maniac: A Doctor’s Tale” was originally published in The Australian Journal v 2 (98) on the 13th of July, 1867. The story is arguably the first Australian ‘vampire’ story—arguably, because the antagonist is not representative of what we expect a vampire to be.

The Australian National Dictionary of Biography has an excellent article on her.   Her life was not an easy one.   Failing eyesight forced her to give up writing.  Her reading public never had any idea who she was, she had severe financial difficulties and was sometimes placed in jail for vagrancy and drunkenness.  In the last few years of her life, The Australian Journal to its great credit supported her with a small pension.

"The White Maniac: A Doctor’s Tale" is really well done enjoyable story.  If I had been living in Australia at the time I would have been an eager reader of her work.   The lead character and narrator of the story, set in London, is a rich young doctor, very highly regarded for his skills and his discretion.   One day he is out and about and he sees a man getting out of a carriage, all dressed in white.   His actions are odd and mysterious so the doctor investigates a bit and finds he lives in an all white house.  He begins to take an interest in the strange man, a foreigner of some undisclosed sort, and one day he sees him out in town wear a dark outfit but when he follows him home he notices the man changes his clothes inside the carriage to all white.   He talks to the man's driver and he tells him inside the house the only color is white.  He wants to know why.

Then one day to is great amazement the man comes to his office for a consultation.   He turns out to be a duke and he asks the doctor if he can help him with the most confidential of medical problems.     He tells him he is the guardian for the daughter of his late brother, a princess.  He says she is mad.  He seems to be about to tell him what is wrong with her then he begins to shudder and tremble and begs the doctor to come to see her at the house.  He comes and the house is totally white as is everything inside the house.  He meets the princess, in her late teens or early twenties and of course she is very beautiful and he sees nothing wrong with her.    She tells him her uncle is the one who is mad and he keeps her prisoner in this all white world.  He comes back several times and he begins to fall in love with her.   He demands to know from her uncle why she is locked up and he tells him he sees nothing wrong with her.  The uncle then tells him an amazing story detailing the madness of the princess, her near homicidal rages caused by seeing anything of the color scarlet.  The doctor is now quite convinced it is the uncle who is insane and the tells him he wants to marry the princess in order to set her free.  The uncle is horrified over this and begs him not to persist in this idea.   In order to prove the uncle insane, the comes to the house, dressed all in white with a hidden gift for the princess, a bouquet of scarlet flowers.   I will leave the horrific ending unspoiled.

You can read this story online here.

This is a story very much worth reading, both as a historical document and for its intrinsic worth.   If you look, you will find a good bit of her work online.