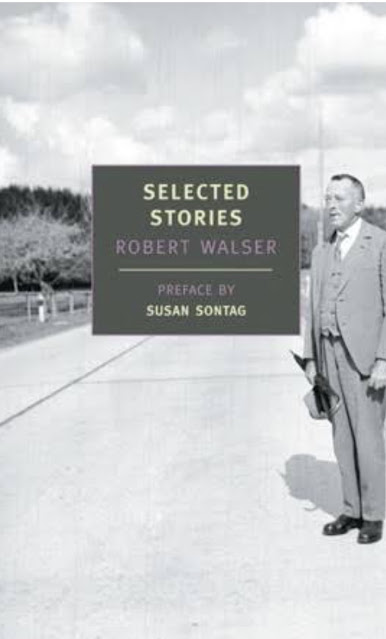 "Walser’s virtues are those of the most mature, most civilized art. He is a truly wonderful, heartbreaking writer"'. Susan Sontag

"Since then I have slowly learned to grasp how everything is connected across space and time, the life of the Prussian writer Kleist with that of a Swiss author who claims to have worked as a clerk in a brewery in Thun, the echo of a pistol shot across the Wannsee with the view from a window of the Herisau asylum, Walser’s long walks with my own travels, dates of birth with dates of death, happiness with misfortune, natural history and the history of our industries, that of Heimat with that of exile. On all these paths Walser has been my constant companion. I only need to look up for a moment in my daily work to see him standing somewhere a little apart, the unmistakable figure of the solitary walker just pausing to take in the surroundings."  William Sebald

Mel first encountered the work of Robert Walser during German Literature Month in 2013, he followed up with posts on short stories in  2014 and in 2015 on his novel The Tanners. There were also posts on him during German Literature Month in each of the last four years.  We are returning to him this year through a very Walserian story, "Heibling’s Story”

“Heibling’s Story”, told in the first person, is the Short Story elevated to high art (see “Notes on Camp”).  Heibling, a bank employee, begins the narrative on his walk home at lunch. Walking plays a big role in the work of Walser.  He launches into what seems a depressive repudiation of his worth.  Under this I see a rejection of any power others think they have over him.  Heibling is both above and below the world he finds himself in.

“The moral core of Walser’s art is the refusal of power; of domination. I’m ordinary—that is, nobody—declares the characteristic Walser persona” - Susan Sontag

Mel hopes once again to  reread Kleist in Thun this month