Coffeeland: ONE MAN'S DARK EMPIRE AND THE MAKING OF OUR FAVORITE DRUG by Augustine Sedgewick - 2020 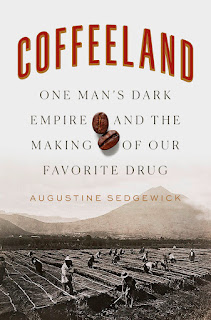 Coffeeland:ONE MAN'S DARK EMPIRE AND THE MAKING OF OUR FAVORITE DRUG by Augustine Sedgewick - 2020

There are three related but distinct aspects to Coffeeland

ONE MAN'S DARK EMPIRE AND THE MAKING OF OUR FAVORITE DRUG.  In part it is a history of the development of coffee into the world’s most popular beverage.  Sedgewick traces e coffee from Yemen, to Java, then to South and Central America.  He shows us how coffee’s spread followed the path of western colonial expansion and its partnership with slavery into Brazil and elsewhere.  Coffee growing was a very labor intensive enterprise and was initially, like sugar, cotton, and other crops profitable only with very inexpensive labor. Sedgewick goes into a lot of detail on Brazilian slavery, ending in 1888, and the immigration of Italians to Brazil.

The one man in the title is James Hill, who emigrated to El Salvador from the slums of Manchester in 1889 at the age of 18.  He would end up running a coffee empire much like the industrial lords of Manchester ran their satanic mills.  The story of how James Hill rose to great wealth on the backs of thousands of often near starving indigenous El Salvadorians is fascinating.  In Industrial Age Manchester mills, a workers productivity was strictly measured.  Hill forced this on his employees through a cruel methodology of not providing enough food to employees who did not dig enough holes to plant trees, pick enough beans and such.  He kept workers hungry and made sure they kept to rigid guidelines.  He employed overseers who could use physical punishment.  Many of the workers were women who were subject to sexual exploitation.  They also used sex with overseeing men to gain advantages.  Coffee growing turned El Salvador into a one crop economy.  History teaches us this can lead to disaster.  Sedgewick traces the up and downs of the international coffee market.

Hill was very enterprising, he studied the works of other growers, he married into an affluent elite family of Spanish speaking planters.  He was a very fast learner, soon expanding his sales into San Francisco.  He developed vacuum sealed cans which preserved coffee for a long time.

We learn a lot about how coffee is  grown.  It takes five years for a tree to become productive.  Coffee is not an easy crop to raise.

There is a third aspect to the book.   Sedgewick digresses into ruminating on world history and events.

I enjoyed learning about coffee in El Salvador and the life of James Hill.

Have a nice hot cup of coffee as you read Coffeeland:ONE MAN'S DARK EMPIRE AND THE MAKING OF OUR FAVORITE DRUG by Augustine Sedgewick.

Of course Hill’s Coffee, very much still big in the coffee business after 110 years, has their own side of the story

Born in England, arrived in El Salvador in the 19th centuary. From a very young age he realized that by introducing new techniques to the cultivation and processing of coffee, he could export coffee beans that met the highest international standards.

He began exporting coffee on his own account at the end of the 19th centuary and, shortly after, won a silver medal at the Pan-American Exposition in New York, 1901.

James Hill founded Las Tres Puertas in 1896, in Santa Ana town, located close Santa Ana’s Volcano whose slopes produce coffee beans of the highest quality. His vision in promoting new ideas and methods to coffee production in our country included the introduction of the Bourbon variety of Arabica coffee.

So great was his contribution to the art of growing, processing, and exporting coffee that, in May 1948 he was awarded with Diploma al merito Agricola cafetalero by the federacion cafetalera de centro America y mexico.”  from https://www.jhillcoffee.com/

Augustine Sedgewick earned his doctorate at Harvard University and teaches at the City University of New York. His research on the global history of food, work, and capitalism has received fellowships from the American Council of Learned Societies, the Andrew W. Mellon Foundation, and the Project on Justice, Welfare, and Economics at Harvard, and has been published in History of the Present, International Labor and Working-Class History, and Labor. Originally from Maine, Sedgewick lives in New York City.”

This book has received well deserved rave reviews in the main stream press.  There are links on the author’s website.

Coffeeland:ONE MAN'S DARK EMPIRE AND THE MAKING OF OUR FAVORITE DRUG by Augustine Sedgewick is a first rate work of narrative Non-fiction.

Email ThisBlogThis!Share to TwitterShare to FacebookShare to Pinterest
Labels: an autodidactic corner selec

As a coffee drinker, I think I'd find this book fascinating. Thank you for your intro to this book, Mel.

Another coffee drinker here. Sounds fascinating, and it is put on my list to read.