Drunk on Genocide: Alcohol and Mass Murder in Nazi Germany by Edward Westermann 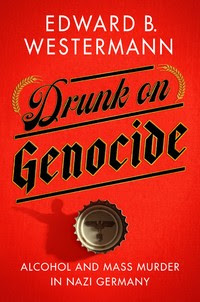 Drunk on Genocide:Alcohol and Mass Murder in Nazi Germany by Edward B. Westermann -forthcoming March 15, 2021 from Cornell University Press

In Drunk on Genocide:Alcohol and Mass Murder in Nazi Germany Edward B. Westermann seeks to demonstrate a close connection between alcohol, male bonding, a compulsive need to prove one’s masculinity and the tremendous enjoyment involved in the killings during the Holocaust.

He cites cites a copious number of incidents where ordinary citizens joined in watching events of mass shooting as one might a soccer game. Germans, Ukrainians, Lithuanians, Romanians and others flocked to watch Jews being shot, often taking pictures of them abusing the bodies for keepsakes.  Massive amounts of alcohol was typically consumed as part of the celebration.  The more joy with which  a German took part in killing and the more he could “hold his liquor” the more of a man he became in the eyes of others.  The killers were not drinking to hide shame but to make it all more fun.

Of course alcohol lowers inhibitions, many concentration camp guards were most feared when they were drunk.  In the camps guards would have lots of marksmanship contests using Jews as targets.  Female and male inmates were routinely raped.  There were official Gestapo rules against sex with Jewish inmates  and drinking while on duty but the penalties were trivial.  I was shocked to learn women who played in the Women's Orchestra of Auschwitz were regularly raped by drunken guards because they received extra food rations and were more attractive targets physically because of this.  Pregnancy was terminated with a gun shot.

Much sport was made of throwing babies in the air and shooting them fueled by alcohol.

Westerman details the ritual drinking parties of SS men.  Female SS guards were often the cruelest, trying to show that they were even more masculine than the men.

I closed this book totally convinced by Westerman.

“In Drunk on Genocide, Edward B. Westermann reveals how, over the course of the Third Reich, scenes involving alcohol consumption and revelry among the SS and police became a routine part of rituals of humiliation in the camps, ghettos, and killing fields of Eastern Europe.

Westermann draws on a vast range of newly unearthed material to explore how alcohol consumption served as a literal and metaphorical lubricant for mass murder. It facilitated "performative masculinity," expressly linked to physical or sexual violence. Such inebriated exhibitions extended from meetings of top Nazi officials to the rank and file, celebrating at the grave sites of their victims. Westermann argues that, contrary to the common misconception of the SS and police as stone-cold killers, they were, in fact, intoxicated with the act of murder itself.

Drunk on Genocide highlights the intersections of masculinity, drinking ritual, sexual violence, and mass murder to expose the role of alcohol and celebratory ritual in the Nazi genocide of European Jews. Its surprising and disturbing findings offer a new perspective on the mindset, motivation, and mentality of killers as they prepared for, and participated in, mass extermination.”

Edward B. Westermann is Professor of History at Texas A&M University-San Antonio, a Commissioner on the Texas Holocaust and Genocide Commission, and author, most recently, of Hitler's Ostkrieg and the Indian Wars.

This book should be in all school libraries.  It is a very valuable addition to Holocaust studies.