From Holocaust to Harvard by John G. Stoessinger (2014) 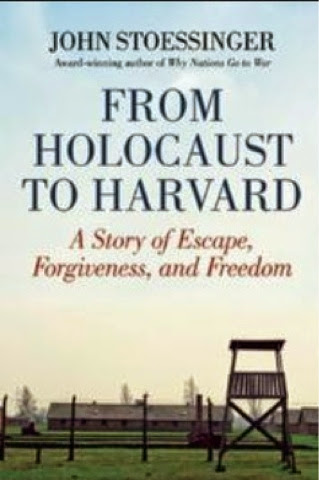 From Harvard to Holocaust -  A Story of Escape, Forgiveness, and Freedom by John G. Stoessinger begins as an account of his escape, in the company of his mother and abussive stepfather, from Austria just before the Nazis take over in 1938.  The author is ten and is heartbroken to leave his grandparents.  He knows Jews are in danger in Vienna from the beatings he has received from Hitler youths but he is still terrified to leave his home.  Stoessinger's stepfather gets a visa that will allow them to make it, by train, to Shanghai, where Jews are thought to be safe.  We learn of his experiences in Shanghai, a European dominated city.  He excels at school earning top honors.  Through the help of a professor, he gets a scholarship to Grinwell College in Iowa.   He excels there also and he begins one of the many romances that he will have.  He gets a very Midwestern American girl from a wealthy family pregnant and enters into what he calls a "shotgun marriage".  This is the beginning of a pattern where he seems to seduce a woman then abandons her when he either gets bored with her or she impedes his career.  He gets a scholarship to Harvard and leaves his wife behind as she wants him to go into her father's business.  His exwives seem to end up hating him. It was fun to see him work selling check writing machines to pay for his education and child support.  By his own admission, he was a poor father.
When I began to read this book I did not know Stoessinger was a world famous political theorist, author of classic books, consultant to the head of the United Nations, advisor to leaders world wide.  I think this might have been a good thing as I saw his career develop without knowing in advance his life course.  We also learn a lot about academic politics at the highest levels, he relied on mentors to advance himself.  In one almost surreal episode, he starts an affair, while married to one of his several spouses, with a mysterious seeming woman who claims to be an international financier, putting together huge loans for giant fees.   Compressing a relationship in which we see long before Stoessinger does that the woman is a fraud, he writes letters of recommendation for her that gets him convicted of fraud.  Through an understanding judge he escapes prison and is ordered to teach in a prison.  Stoessinger's account of this is very interesting and it brought out the best in him.  He was given a Federal Pardon by President Ronald Reagan for his efforts toward international peace.  It was fun to go along on his international travels.
Stoessinger does come across as selfish, using countless women then moving on.  He pretty much admits this.  He also is kind, caring, emphatic and brilliant.  He talks a good bit about how his early years impacted his character.  His grandparents died in a concentration camp.
I received a review copy of this book.
The Kindle edition of this book is $14.95.  This is way too much.  I liked this book but cannot in good consciousness endorse the purchase at that price.

Dr. John G. Stoessinger is an internationally recognized political analyst and a prize-winning author of ten leading books on world politics. He holds a Ph.D. from Harvard and has taught at Harvard, MIT, Columbia and Princeton. From 1967 to 1974, he served as acting director of the political affairs division at the United Nations. He is a member of the Council on Foreign Relations and lectures extensively throughout the world. He has been elected to Who's Who in America and Who's Who in the World.

On the eve of World War II, Stoessinger fled from Nazi-occupied Austria to Czechoslovakia. Three years later, he fled again via Siberia to China where he lived for seven years. In Shanghai, he served with the International Refugee Organization.

Dr. Stoessinger is the author of The Might of Nations: World Politics in Our Time, which was awarded the Bancroft prize. The book has gone through ten editions. He has also authored The Refugee and The World Community: Financing the United Nations Systems, Power and Order; The United Nations and the Superpowers; Nations at Dawn: China, Russia, America; Why Nations Go To War; Henry Kissinger: The Anguish of Power and Crusaders and Pragmatists: Movers of Modern American Foreign Policy. Dr. Stoessinger was Chief Book Review Editor of Foreign Affairs for five years and is presently Distinguished Professor of International Affairs at the University of San Diego. He has been the recipient of numerous honors and awards, including Honorary Degrees of Doctor of Laws from Grinnell College and the American College in Switzerland.

During the past year, Dr. Stoessinger has addressed audiences in the fifty states of the Union and in more than twenty foreign countries.

I didn't recognize his name either. He's a very important person.

Topazshell. I think learning who the author was from reading the book made it more interesting. Thanks for your comment and visit.