In the Garden of Beasts - Love, Terror, and an American Family in Hitler's Berlin by Erik Larson (2011) 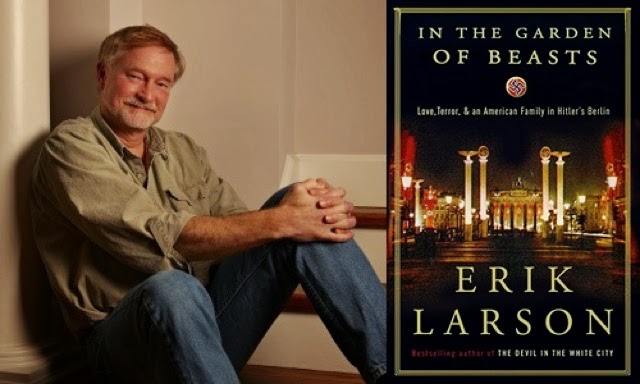 In the Garden of Beasts - Love, Terror and an American Family in Hitler's Berlin by Erik Larson is a fascinating look at a savage era in the history of Germany from the point of view of America's first ambassador to Nazi Germany, William Dobbs.  Dobbs was a University of Chicago professor whose great passion in life was his history of the the old American south.  America's biggest worry about Germany in 1933 was making sure it did not default on massive bond debts to American Bankers.  We see many Americans in positions of power were "vaguely anti-Semetic" and felt Jews had to much power in America.
Dobbs went to Berlin in 1933 with his wife and adult son and daughter Martha.  Much of the book centers on the free spirited sexually charged Martha's reaction to Berlin.  At first she is fascinated by all the handsome young men seemingly dedicated to building a new Germany.  Most ambassadors were wealthy men who supplemented their entertaining duties and maintained a lavish lifestyle with personal funds.  Much of the Berlin staff was from this elite often ivy  league background and Dobbs had only his salary.
He felt and was looked down on by his staff and he feared the German butler was a spy. He could not host the grand parties other ambassadors did.
Martha, bold and beautiful, has numerous romances including one with Rudolph Diels, head of the Gestapo.  The narrative is structured around Ambassador Dobbs slowly realizing that Hitler was not going to "calm down", as the state department establishment thought, as he witnessed increasing acts of savagery against Jews and in Nazi Party infighting.  American citizens were beaten by Storm Troppers for not giving the Nazi Salute.  Martha also has a romance with a Russian diplomat (all the while still married to an American).  Slowly the horror of the intentions of Hitler becomes clear as more and more preparations for war are made and harsh deadly attacks are made on Jews.  The anti-Jewish rhetoric becomes worse and worse.
Larson is a hypnotic writer.  The chapters are short and something exciting happens in each of them. We see how the Dobbs worry for their daughter.  Their  son plays less a part in the narrative.  What Dobbs really wanted was to work on his history book.  Larson follows the whole family back in America to the end of their days.
This is really as much book about a family than a history of the era.
I was kept fascinated by this book, I kept wondering what will Martha do next, when will the state department in Washington heed the warnings of Dobbs and did anyone in authority in America really care about European Jews?
This is a really good book.  I endorse it to all with an interest in the era.

I have heard so much good about this book, and bought it a while ago. Looking forward reading it. It do sounds great from your review.