The Last Jews in Berlin by Leonard Gross (1981) 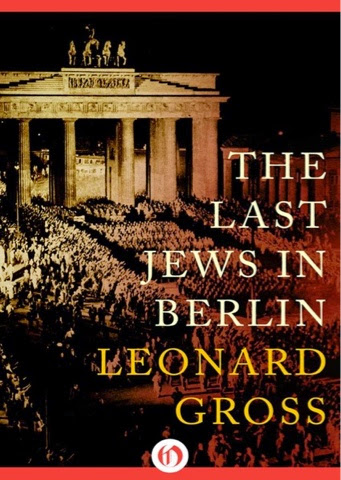 When Hitler became ruler of Germany on January 30, 1933 there were 160,000 Jews living in Berlin.  By February 27, 1943 when Goebels declared that Berlin was nearly totally "Judenfrei" there were still about 4000 German Jews living in Berlin, some hiding in cellars, some in broad daylight trying to pass as "Aryan".  The Last Jews in Berlin by Leonard Gross tells the story of the 1000 or so Jews still living in Berlin when the war ended.
Most German Jews, as did the American and British governments, thought Hitler would "calm down" or not last in power.  Per Gross, in W W One German Jews were very loyal to Germany.  Many Jews felt their WW One Iron Crosses would save them.  Many did not first understand what happened to Jews rounded up and shipped out.
I was somehow very glad to learn that every Jew who survived did it with the help of nonJewish Germans.  Many helped put of pure moral goodness, and many were paid.  Perhaps the most disputable persons were Jews who acted as "Jew Catchers", turning in people often for petty rewards.
The story is told via the life history of about ten people, some alone, some in families.  They could not in most cases just hide in a celler and wait it out.  They had to have money and ration cards to live so most had to go above ground where they were in grave danger.  There are numerous vivid encounters with the Gestapo and Jew Catchers in the book, near escapes and people brazen out Gestapo men, usually not very bright, by acting outraged when asked if they are Jews.  We learn how the Jews lived, many ordinary Germans helped them.
As the war turned against the Germans, Berlin was subjected to nightly bomb attacks of ever increasing proportion.  Even though it threatens them the Jews saw it as sign the war might soon end. Many had radios and listened to the BBC.
The Jews were able to come out of hiding when the Russians reached Berlin.  Russians were feared, with good reason, as mass rapists, but many were happy to help the Jews.
The final section in which Gross tells us of the great lives the Berlin Jews, most of whom stayed in the country made for themselves and their families was extremely moving.
The Last Jews in Berlin is a very exciting, scrupulously researched and morally uplifting book anyone interested in the period and the Holocaust should read.
I was given a review copy of this book.
Author Auto Biography
I'm the author, co-author or ghostwriter of 22 books, including my latest novel The Memoirs of JFK. Prior to writing books and later films and plays , I wrote for numbers of magazines, principally LOOK, on whose staff I served for twelve years as a senior editor, Latin American correspondent, European editor and West Coast editor. Mel u

this is one book i'd like to read. and, like you, i am so glad that non-jew germans were helping their jewish brothers.

neer. This is a very moving book. Thanks for your visit and comment