"I Lie Here in My Coffin" by Jillian Godsil 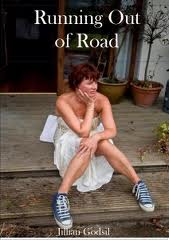 You are invited to join in ISSM3.  You can do a Q and A, contribute a story, an article and perhaps even a poem.  Sometime latter this year, if I can get enough source material and poets interested in participating I may well take the plunge and go totally out of my comfort zone and host 21th century Irish Poetry Month.  I know many of the writers I have featured this month are also poets.   The only way out is deeper in.

"I Lie Here in My Coffin" comes from a marvelously named collection of short stories by Jillian Godsil.  The collection is entitled The Irish Book of the Dead - Part 1.  Of course this title is meant to make us think of The Tibetan Book of the Dead and it brought to my mind James Joyce's "The Dead".

A lot of people imagine what their funeral will be like.  How many or will any people show up?  How fancy a casket will they shell out for?   How upset will my kids, my spouse, my friends and family be?  We like to imagine ourselves there to observe it.  Of course thinking this also lets us feel we do survive death and will know what is going on in our world.  I think part of what this marvelous story is about is the huge pain of knowing the world will go on without us and we will not know what happens.  We will not know if our children made good lives or if the boss we hated got hers one day.

"I Lie Here in My Coffin" is told in the first person by a recently dead of a heart attack woman.  She died grocery shopping and she wonders what the store did with the items in her cart.  She recalls the kind of underwear she had on, now we know why our mothers told us to always wear clean underwear.  She thinks back on her life long issues with her sister  Ruth, dead five years ago and she seems mostly concerned over who has the best coffin.   Then I admit I was a bit shocked when she recalls some of the affairs she had during her long term marriage.

I greatly enjoyed this story.  Jullian Godsil is a quite productive writer and has lots of interesting and challenging life experiences which she uses to fuel her creativity.

have been a writer since I was very little.  I had no doubt as to this career in my first decade of life.  On entering my teens, I was just as adamant but strangely found little time to actually write fiction, only a few scattered attempts echoing whatever book I happened to be reading at the time.  Into my twenties, I found university and then travel absorbed my time.  I lived in London, Sydney and Singapore, before returning to Ireland with my first husband and first child.  For my thirties it was all marriage and my children, two girls, which occupied me, as did a very demanding job and restoration of a period house in Wicklow, South Ireland.  It was as I approached my forties, I suddenly went ‘Whoa! Where are my novels?’ and realised for all my talk I hadn’t actually started let alone finished any novels.  In my final year of my thirties I sat down and wrote my first children’s novel, The Bell Tower.  I had been experimenting earlier with pre school children’s literature but this was my first full scale attempt at writing a novel.  It took two weeks to finish.  It was also an autobiography with no relation to my life, just samplings of my growing up.
Next up, I wrote Running out of Road which is my first adult book and it took four years to write.  It is most definitely not autobiographical but my divorce over this period had a huge bearing on the novel.  Once, half way through the writing, I met an old work colleague and as we were both struggling writers we compared notes.  One point he raised was his inability to write sex scenes.  It was very funny as I had discovered my divorce had given me the courage to write on lots of topics, one of which was sex!
I have also written many short stories and towards the end of 2011 began blogging in earnest. 2012 was a good year for my writing. I did it more frequently and with more passion. I am slowing leaning to hone my craft.
In a parallel world everything else was falling apart. My dream house, the Raheengraney of these pages, was hurtling towards repossession. I am in court now struggling to make sense of it. I have another offer on the house but the bank still refuses to talk to me. It would prefer to repossess than try and recoup some money.
My business also collapsed in 2011 – and the bailiffs were called in. I thought that was bad but I struggled on for another year until I had to call time on my office and long term colleague. That nearly killed me. I moved home and starred for long hours at the computer. I wrote a bit. I slept a lot. I found it hard to get up in the morning. I experienced at first hand the mind crushing impact of loss of money and home and a financial future can do to a person. So I wrote a book, called Does my DEBT look big in this to try and help others. My book is about the emotion of debt and how to hang onto hope even when it is in very short supply. The profits are pledged to  Pieta House, the front line charity for the prevention of suicide in Ireland.
I was also writing other books. Too many rabbits some might say but these are starting to come to a natural end. The first is a non fiction book about a family coping with a severely disabled child. It is a very hard story to tell. I hope to be finished this first quarter of 2013.
I am also writing another book with a good friend on her life with horses. An inspiring woman, she founded the only equine charity in Ireland and has dedicated her life to horses.
I am writing still about injustice and abuse. I feel I have a obligation to use my words to help  others.
I write a lot of fiction too – some in short story format. I am getting into my stride in this area too.
I have a great family and many very good friends who have helped me during these tough years. I thank them here.
Finally, I have two fantastic girls who keep me on the straight and narrow.

Jillian Godsil has kindly agreed to do a Q and A Session for ISSM3 and she will tell us about some of her other interests there,I hope.