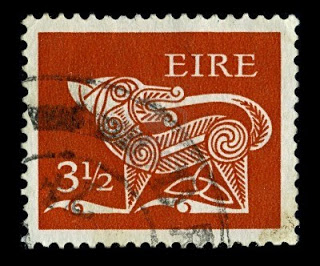 I have decided to extend ISSM3 until April 7 because of all the exciting events that are pending.   You still have plenty of time to participate.  E Mail me if you are interested.

In July of last year I read and posted on a story by Danielle McLuaghlin, "Bewitched" that I really enjoyed reading.  (My post is here.)  Here is some of what I said about her wonderful story:

"Bewitched" is an amazing story about a moment in which a bookish socially awkward teenage girl takes a step toward real maturity and wisdom, a step that decades do not take most people.  "Bewitched" is structurally the perfect short story."

Ethel Rohan did a beautiful post during ISSM2 last year on another story by Danielle McLaughlin,  "All About Alice".  (You can read it here.)  Here is part of what Rohan said about this story:

"While my first read of this story hung onto the sheer joy of tale and suspense, and was fueled by the need to get to the conclusion, my subsequent reads of  “All About Alice” focused on trying to figure out just how McLaughlin so beautifully crafted and rendered this moving and memorable story. The voice, tone, and pacing in “All About Alice” seem perfect. There isn’t a beat wasted or missing. The three big ‘Ds’ of details, descriptions, and dialogue are telling and serve to both reveal character and progress plot."

"Midnight at Ali's King Kebab Takeaway" is another very well done perfectly plot story with lots of details to make the story very real for us. In fact this story set in a sausage and chip shop by the ocean was so real it made me grave a nice hot sausage on a roll with lots of piping hot chips with mustard and ketchup to dip them in.

The story begins at 1000 am in the morning. It is raining and he has only one customer this morning, an eight- teen year old woman. It is too early for his normal take out customers to be there anyway. Ali used to be married to an Irish woman, he had two dark eyed sons with her. One day she left him for a curly headed Irishman. I will quote a bit from these magnificent lines that compress much and project a grim future for the wife that left him:


"Ali’s wife left him last summer. Bolted, Frank, one of his regulars, said. She left him for a mechanic from Mullingar that she met during the Rally of the Lakes in Killarney. She came back a week later for her jewellery and their two dark-eyed little boys. The mechanic had waited outside in his Honda Civic, two wheels straddling the pavement. He had one arm out the window, the other thrumming fingers on the steering wheel. He stared in at Ali, ugly music pulsing from the dashboard, then raised one finger in a word-less war-cry. A curly-headed little runt, Frank had called him. Ali sees the boys every second Sunday in a fast-food restaurant in Athlone where the chips are thin and powdery."


The girl has her own tale of abandonment.   We do not know her full life history.  We know she was in a foster home for a while until the wife of the family caught her husband in bed with her husband.  We are not real sure how this happened but we know it was nasty and exploitative.  Of course the wife went nuts when she caught them.     The man takes her to the bus station and gives her ten pounds and tells her not to worry his wife will get over being mad as if that were all she had to worry about.

Ali is only human, he eyes the woman.  She notices the help wanted sign and she asks him if her prefers a girl or a boy.  Up until now he had wanted a boy he could talk sports and such with but he tells her a girl.  She asks him if a room in included and he thinks of the room his sons no longer use and he says yes there is a room.  Nothing happens but there is hope for two people who before seemed to have endless loneliness staring them in the face.

There are lots of very telling details in this story but as you can read it online here I will not say anymore.

As I read the chapter I recalled a question I have asked everyone who has so far done a Q and A Session:

Declan Kiberd has said the dominant theme of modern Irish literature is that of the weak or missing father? Do you think he is right and how does this, if it does, reveal itself in your work.

I pondered if this story is another text book case of this.  The young woman lived in a foster home so her real father and mother were gone from her life, her foster father took advantage of her sexually, Ali's wife takes his kids from him and sets up as a father replacement figure a man we know is not going to work out at all.  We also do wonder why the woman left Ali, was it just she, we think she is Irish as she is described as having porcelain skin,  wanted an Irishman or was Ali too caught up in his food business to me a good father or husband.  So for sure we have one missing father, her real father, an abusive foster father, and Irishman we know will be a bust as a step father and we do have to wonder about Ali.  It is also a story about being a stranger in a strange land, about Ireland seen through eyes of Ali.  We have no idea how he got there and I think the story  is better that way.

Both people start what may be a new life with their pasts hanging heavy over them.  For sure I wished them well.  I really enjoyed reading this story.

You can read the story  here

Danielle McLaughlin lives in County Cork. Her stories have appeared or are forthcoming in The Stinging Fly, Boyne Berries, Crannóg, The RTE TEN website, Inktears, and in various anthologies including The Bone Woman and other short stories, recently published by Cork County Library and Arts Service, the Fish Anthology 2012 and the Bristol Short Story Prize Anthology 2012. Another of her stories was shortlisted for the Francis Mac Manus Competition 2012 and will be broadcast on RTE Radio 1 in July. She won the Writing Spirit Award for Fiction 2010, a WOW!2 Award for Fiction in 2011, the From the Well Short Story Competition 2012, and the William Trevor/Elizabeth Bowen International Short Story Competition 2012.


She has kindly agree to complete a question and answer session for ISSM3 so please look for that soon.

I look forward to reading more of her work over the coming years.