"The Shot" by Mark Haddon

My Favorite Sunday Times Short Stories So Far
1.  "Miss Lora" by Junot Diaz
2.  "The Shot" by Mark Haddon
3.  "The Beholder" by Ali Smith

The Sunday Times EFG Short Story Award is the richest short story prize in the world at 30,000 Pounds.   Last year Ireland's Kevin Barry won and this year Junot Diaz won for "Miss Lora", a gritty story of the life of a young Dominican man in New York City.  In addition to the prize story, I am posting on, as part of ISSM3 on all five finalists.  I am doing this for one simple reason. All of the writers in this collection are a commercial success as a writer.  These are the kind of stories editors and publishers believe the short story buying anthology public wants.   These are the kind of writers who regularly publish in The New Yorker.  They will influence the styles of aspiring short story writers world wide.

"The Shot" is a very interesting for its narrative mode and how it goes in an out of different periods in the life of the narrator, from a young boy to a man in his fifties.   We meet the narrator as young man, less than ten.  He has an older brother, father, and mother.  Like most older brothers, he does not want the narrator in his room but one day he invites him in telling him he has something to show him.  It is a rifle.  As I read this I thought at once of the dictum attributed to Anton Chekhov in which he said if you show a gun in the first act of play you must fire it before the play is over.  I at once began to wait for the gun to be fired and I think that is what most readers will do.  Of course the gun is a symbol of manhood.  It also gives the brother the ability to rise above petty morality by killing another boy.  Some how, and I guess this is just me, this reminded me of the theme of Crime and Punishment played out for British school boys.

There are a lot of interesting very intelligent things said by the narrator.  It is fascinating to see how he still things back on what did happen when the gun was fired  after many years latter.  I think the best things about this story are the almost in passing observations about life made by the narrator.   I am for sure glad I read this story.  It is interesting, somehow it felt derivative to me.  Others have said it was by far the best work in the collection.

Mark Haddon is best known for his novel The Curious Incident of the Dog in the Night-Time (2003), which won the Whitbread Book 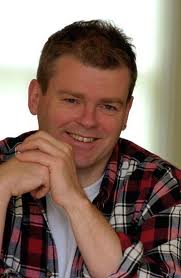 of the Year Award, a Commonwealth Writers’ Prize, the Guardian Children’s Fiction Prize and the Booktrust Teenage Prize. It has also been adapted into a successful and critically acclaimed stage production. He has also written A Spot of Bother (2006), which was short-listed for the Costa Novel Award, and The Red House (2012). Besides being an accomplished author, Haddon is also an abstract painter and has worked as an illustrator and cartoonist.

I intend to post on the other four stories soon.

Hi, Mel
nice post. I loved, loved, loved "The Gun" by Mark Haddon! What a gift we were given though by the EFG prize. 6 wonderful little pieces of life for a couple of euro!