"A Long Winter" by Colm Toibin 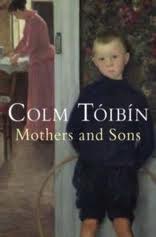 Colm Toibin is one of my favorite contemporary writers.   I have read and posted on his wonderful novel about Henry James, The Master, Brooklyn (about a young Irish woman who moves to the United States, and his most recent very controversial  The Testament of Mary.  I also read and profited from his book on John Synge and Lady Gregory, Lady Gregory's Toothbrush.   Additionally I have prior to today read all of the eight short stories in his collection Mothers and Sons but for the final and longest one, "A Long Winter".    All of the short stories are superb.  All but "A Long Winter", which is set in the Pyrenees Mountains of Spain,  are set in Ireland.

There are four main onstage characters in "A Long Winter".   We have the mother and wife of the family, her husband and the father of their two sons, one of the sons who is at home but do to join the army soon (another son is in the army now), and a house boy who joins the story about sixty percent into it.   One day the son, in late teens, is with his mother at the local market.   Normally she goes there to sell eggs and vegetables and buy supplies but today she is just their to buy.   She tells her son she has something to do and  goes off on her own.  She is gone a long time so he goes looking for her.   He sees from the windows of a tavern his mother rapidly down a glass of wine, with two empty glasses next to her.  He never knew she drank at all.   She tells him the cooking oil they need is not in stock and it will be sent to the house in a couple of days.   He soon finds out when his father pours out the oil when it comes that it was not oil but terribly cheap homemade wine.   Her doctor had told her that the wine was going to kill her.   A terrible fight occurs between the parents.   Things seem normal for a while then one day the mother is just gone.   It is the middle of winter and they go to look for her.  They are soon joined by the police and others from the village.   There is a terrible since of apprehension that hangs over the story.  The story line also deals with the awaking sexual attraction of the boy for other men, including a young police officer.   The character of the houseboy that joins the family after the mother is gone is a brilliant touch.  Toibin has such a light masterful touch that it is a joy to read his work.    He has another collection of short stories I hope to read one day.