"The Jury Case" by Eric Cross 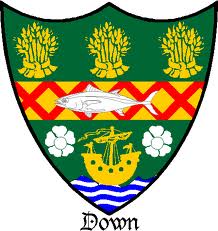 1942 finds England fighting for its survival against the Germans.   Ireland is officially neutral, some say it is following the principle that the enemies of my enemies are my friends.  There was a huge Swastika  in Dublin.

Gas rationing is introduced.   Elizabeth Bowen publishes Bowen's Court while spending most of the war in London where she did heroic work as an air raid warden.   Eric Cross publishes in The Bell, with a forward by Frank O'Connor, The Tailor and the Antsy (from which this story is taken)  and it is banned in Ireland by the censorship board for its then "bawdy" humor.  Anything vaguely suggestive of pre-marital sex or gay affairs could cause a book to be censored in Ireland. 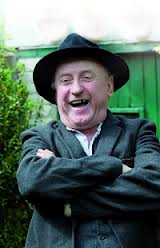 The Tailor and the Antsy is based on the life of an Irish tailor, Timothy Buckley, who was a famous story teller and his wife Anastasia, Antsy. The book produced great outrage, it's alleged obscenity was debated at length in the upper house of the parliament of Ireland.    The big fuss was that they lived together before they were married.  The book was banned in Ireland until the 1960s.    Three priests came to Buckley's house and made him, while on his knees praying for forgiveness, burn the book.  It does seem a bit odd that in a time of the greatest war in all of history, the Irish parliament would hold a long debate on what seems to us a book children could read if they were not bored by it. 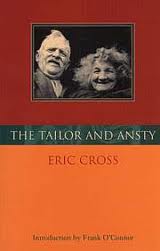 "The Jury Case"  is set in rural Ireland.  Twelve men have been summed to a coroner's inquest  trial to determine if a death is an accident or foul play.    As I read this story I thought "this story is playing right into the English image of the Irish (in 1942, not now of course) as drunken ignoramuses dominated by their wives".   These are not your English jury of twelve men good and true.  I was not sure if this was meant as satire of the Irish stage character type or if it was meant for an audience who saw the Irish that way.  I will say that either way it was fun to read.  Here is how the narrator describes the jury.

"They were twelve working men. Farmers and fishermen and such class of people. They were twelve ignorant men-as ignorant as any twelve men you would find in this parish, and, God knows, that wouldn't be difficult".

Most of the jury have no idea why they have been called to the hotel where the inquest will be made.  Some think they are to be charged with the murder of the dead man, some think they are going to his wake, others that they were to be his pall bearers.   After viewing the body and learning why they were there, and having a few drinks, they find they have to be sworn in and this causes a controversy as one of men thinks swearing is a sin.  They get through that.  Then they are in the room where they will decide after seeing the body and being sure he was dead it it was murder or not.  One of the jurors says the man who found the body once tried to cheat him in a horse trade and as far as he is concerned that means he murdered the man.     The sheriff and coroner are with them to answer any questions and keep order.  The men don't want to be thought simple so each must give his opinion.  The story really is funny (OK maybe some Irish might be offended if very sensitive)  I loved these lines.


`The coroner explained suicide, too, but Dan Bedam had not heard of that either. He wanted to know if it was Irish. In the middle of this argument there was a knock at the door, and in walked "Ball o' Wax's" wife with his dinner. 'She's the divil of a great pounder of a woman, who would make a grand door for a car-house. "Ball o' Wax" is only a small class of a man, but he had a fierce appetite, and his wife was afraid that he would die if he did not have his dinner."

The deliberation continues and it is clear they cannot come to a conclusion.  The debates are really fun to read.  It ends as insultingly as it starts.

I read this in Classic Irish Short Stories edited by Frank O'Connor.