"The Beholder" by Ali Smith "The Beholder" by Ali Smith

You participation in ISSM3 (which I am open to extending until April 7 to get all the Q and A Sessions properly done) is invited and desired.  E Mail me if you are interested.

Yesterday I did a post on the Sunday Times short story award winning work, "Miss Lorca" by Junot Diaz. (My post is here.)  This is the biggest prize for a short story in the world at 30,000 Pounds.  Last year Ireland's Kevin Barry won.   I included the post within the framework of Irish Short Story week as Diaz is the very epitome of a literary success story and his work will serve as role model for countless other writers.   There were five other short stories short listed for this prize.   All of the other stories are by British writers and they are published in a fairly prize Kindle book.   The other writers are all English, not an Irish writer made the cut this year.  Nevertheless, these stories are what publishers want, what big name judges feel are the best of short stories and they will serve as role models, admit it or not, for many aspiring Irish short story writers.   I mean who would not want to win the prize and enjoy the literary super-star status of Junot Diaz or Kevin Barry.   Short story styles go in an out of fashion and I guess these stories are the trend setters at least this month.

Ali Smith is one of my favorite contemporary short story writers.   I really like a lot her "True Story Short".  In addition to that I have posted on two other of her short stories and her series of meta-fiction lecture given at Oxford, Artful.  In fact I took a line from "True Story Short" and incorporated it into some of the Q and A Sessions with Irish writers this month when I asked them if this line from the story makes sense to them "Is the short story a goddess and nymph and is the novel an old whore?"


"The Beholder" is a very interesting story which combines elements of magic realism with a story about a medical mystery.

A woman has a strange growth on her chest.  The doctors do not really know what it might be.  Of course it could be cancer so they send her for a lot of tests.

She meets a Gypsy in the park one day (lot of Gypsies in older Irish stories, gypsies are often confused by the ill-informed with Travellers, who tells her, without seeing it that she has a nice licitness growing on her chest and to be sure and water it.   She also takes all of her money, the doctors would get it any way.

Now the story gets real weird.  Here is her conversation with the gypsy:

"I think that may well be a very nice specimen you’ve got there in your chest, if I’m not wrong, a young licitness. A young what? I said but a couple of community police officers were strolling up the street towards us and she was busy tucking away her sprigs of heather into her many coat pockets, in fact it looked like her coat was more pocket than coat. Give it a few hours of sun every day if you can, she called back over her shoulder as she went, stay well"

Did I tell you thinks were getting strange.  It turns out what she has growing on her chest is a rose named after Milton's "Lycidas".   At times it seems the woman is almost changing into a rose bush or perhaps that is what she always was.

This was an interesting story, will make you go "humm" but of this and "Miss Lora" if I were a judge I would go with Diaz on this. 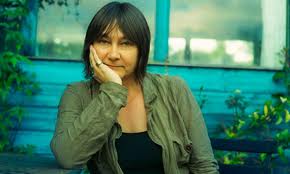 Ali Smith was born in Inverness, studied at Aberdeen and Cambridge universities and lives in Cambridge. She’s been writing novels, stories, plays and occasional journalism since 1995. Her most recent books are Artful (2012), a work of melded fiction and essay based on a series of talks she gave at St Anne’s College, Oxford in 2012 as Weidenfeld Visiting Professor of Comparative European Literature, and There But For The (2011), which won the Hawthornden Prize and SMIT Best Scottish Fiction Award.


There are four other stories in the collection for 2013 and I plan to post on the other four soon.  For sheer fun I will rank them.