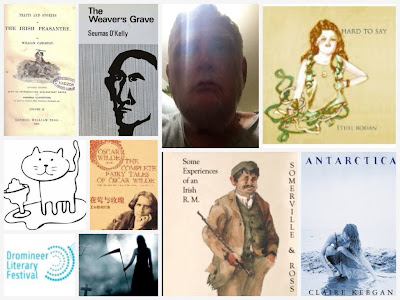 "Like when I was fifteen and my grandmother was diagnosed with inoperable cancer. I had always been very fond of my grandmother but after I heard what was wrong with her I started to behave as though she was already dead. When I looked at her, propped up on her pillows, her soup spoon wavering because she was almost too weak to hold it up to her mouth, I felt like asking her why she was even bothering to eat, why didn't she lie down then and there and get it over with. She asked my mother what was the matter with me, why was I being cold, when the truth was that I was looking past her, past the six months that the doctors had given her. I saw her reduced to an abstract figure, like those chalk outlines the police draw on the ground around a corpse. She was just someone who would disappear from the face of the earth in six months time." One reason I do long term events on the Irish short story (I am possibly going to have one on short stories of the Indian Subcontinent later in the year) is to motivate me to read writers whose work is new to me.  I am very glad to add Caitriona O'Reilly to my lists of Irish writers I want to read at length.

Her short story, "Amour Propre" is a brilliant told in the first person account of how a healthy, physically attractive young woman lost interest in sex.  I have talked before how a lot of Irish short stories deal with issues related to emotional reserve and the inability to sustain feelings or to form bonds.  The story is very witty.   At first the woman stops shaving her legs, underarms etc.  She says she sees no point to it.  She lives in  cold climate where people do not wear shorts very often so no one really notices.   She works in a call center, just to fill in time between a real job, and she starts a relationship with a man that works there.  Just because it is the thing people do she has sex with him.  She does not hate it and she does not seem to be a gay she just does not find it interesting.   Soon the man calls her frigid.  He gets in a wreck on his bike and she finds she cannot summon up the appropriate emotions.   We soon learn there is a kind of philosophical basis behind her lack of emotion.   It is her response to her perception of the futility of life.  When her grandmother, to whom she is close, develops cancer and is given a few months to live, she cannot bring herself to display the appropriate emotion.

It is on a deeper level about the issues of sustaining feeling while looking into nothingness.  It also can be seen as an account of a kind of young cynics credo of "why should we do anything when we will all die in the end".

I enjoyed this story a lot and hope to read more by the author.


Her debut collection, The Nowhere Birds (2001), won the Rooney Prize for Irish Literature, and The Sea Cabinet (2006) was a Poetry Book Society Recommendation and was shortlisted for the Irish Times Poetry Prize. She collaborated with David Wheatley on the chapbook The Three-Legged Dog (2003), and has also worked with visual artist Isabel Nolan.

O’Reilly, who has served as a contributing editor of the Irish poetry journal Metre and has also edited Poetry Ireland Review, works as a freelance writer and critic. She has taught at Wake Forest University and the Irish Writers’ Center in Dublin. O’Reilly divides her time between Wicklow and Dublin.

I read this in Scealta:  Short Stories by Irish Women edited by Rebecca O'Connor.