For what it is worth, I thought "Miss Lora" was for sure the best of these stories.

In my posts on the first three stories I have explained why I feel justified including the six final stories for The Sunday Times EFG Short Story Award as part of ISSM3.  Basically these are example of what are perceived as in demand style short stories that professional think will sell.

"Evie" by Sarah Hall has even more sexual content in it than "Miss Lora" by Junot Diaz, and that is saying a lot.  "Evie" is a well done story.   Married men, have you ever wished your wife would initiate more sex, do things that only girl friends or even hookers are supposed to do?  This story is about what happens when this comes true for Evie's husband.  The plot is very linear and once you get the idea fairly predictable.

Evie first changes her eating habits, craving high sugar foods she had always avoided, then she starts drinking a lot, whiskey.  Then she starts demanding sex in a way bolder fashion than she ever had before.  Soon she wants sex several times a day (yes I told you this was a frightening story) doing things she would never do, other than maybe on her husband's birthday before.   He walks in on her watching hard core porn while naked and stimulating herself.  Shades of a sexual exorcism seem in order to him when she tells him she wants to have sex with him and their old friend Richard at the same time.  Soon she comes home with a letter from work saying she has been acting inappropriately.   She has asked several of the men there to have sex with her.   Of course the husband knows something is very wrong with his once very proper wife.  I will tell just a bit too much of this story.  One day as he and his friend Richard are just done with a joint session with her she begins to foam at the mouth and pass out so of course they rush her to the hospital.

When the ending comes, I went "Oh so that was what it was". 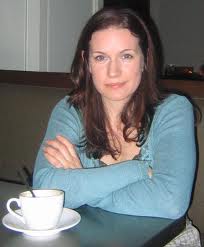 Sarah Hall is the author of Haweswater (2003), which won the Commonwealth Writers Prize for best first novel, The Electric Michelangelo (2004), which was short-listed for the Man Booker Prize, the Commonwealth Writers Prize, the Prix Femina Etranger and was longlisted for the Orange Prize for Fiction, and The Carhullan Army (2007), which won the John Llewellyn Rhys Prize and was listed as one of the 100 Best Books of the Decade by The Times. Her most recent novel, How to Paint a Dead Man (2009), won the Portico Prize for Fiction 2010 and was longlisted for the Man Booker Prize.