"The Madness of Andelsprutz" by Lord Dunsany 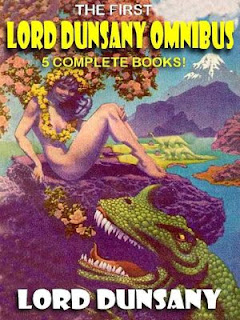 "All these souls if cities that were dead spoke that night on the mountain to my city and soothed her, until at last she muttered of war no longer, and her eyes stared wildly no more, but she hid her face in her hands and for some while wept softly. At last she arose, and walking slowly and with bended head, and leaning upon Ilion and Carthage, went mournfully eastwards; and the dust of her highways swirled behind her as she went, a ghostly dust that never turned to mud in all that drenching rain. And so the souls of the cities led her away, and gradually they disappeared from the mountain, and the ancient voices died away in the distance."

Born into considerable wealth into a very famous family of high achievers, he was far from one of the idol rich.    He was at one time the chess and the pistol champion of Ireland.   (Not a man to challenge to a mental or a pistol match!)   He worked with W. B. Yeats and Lady Gregory in the Irish Theater.   He served in the second  Boer war and in WWI he was a captain, serving for a time in the trenches at his own request.

He was a major figure in the Irish Literary revival and was given an honorary doctors degree by Trinity College in Dublin for his contributions to Irish Culture.

Maybe the work and world of Edward Plunkett, the 18th Baron of Dunsany is one that has been left behind.    Maybe people stopped being interested in reading stories of the glory of ancient Ireland replete with magical creatures and fabulous cities and things of great wonder.   Maybe there is too much repudiation of the developments of the modern world underlying his work.    Maybe there is even jealousy of his great inherited wealth and dislike of the Anglo-Irish roots of the family money.   He is never mentioned in the 800 plus pages of Inventing Ireland:  The Literature of the Modern Nation by Declan Kiberd.


Last year I read a story by Lord Dunsany "The Kin of the Elf Folk" during ISSW2 that I totally loved.  I do not to this day see why it is not listed among the great short stories of the world and why it seems to be included in no anthology of Irish short stories.   Maybe people are turned off by the references to mystical beings and such but below the surface of this story is a brilliant account of much that really is wrong with the modern world.    I have read a number of his other stories and I do see many are kind of laments about the past and I do see that the life style and world of Lord Dunsany was one where birth rank meant everything and de facto in Ireland that worked out meaning you had to be Anglo-Irish to matter even if you screamed your Irish heritage to the world.

"The Madness of Andelsprutz" is not a modern literary short story.  It is very much a tale lamenting the ancient pass and strongly suggesting the best days of mankind are over.   The "plot" of the story sounds silly but if you give yourself over to the prose style of the author you can somehow see back eons to a time when cities had souls and when it meant something to be from a place you could be proud to call your home, when knowledge not ignorance was celebrated.   Read some of his short works before you scoff.   A man finds himself in the city of Andelsprutz.  Thirty years ago the city was conquered  by foreign invaders.    The soul of the city and its people kept hoping the empire of which it was once a part would come back and retake it but one day the soul of the city just gives up.  The narrator witnesses it leave and he follows it for three days, with no food and little water until he sees a great coming together of the souls of once great cities.  Most of the names of the cities are creations but Carthage is there.  He sees the souls of the cities comforting that of Andelsprutz.   I really like the prose style of this story:


"And the great shadowy form that was the soul of Andelsprutz went away muttering to the mountains, and there I followed her—for had she not been my nurse? Yes, I went away alone into the mountains, and for three days, wrapped in a cloak, I slept in their misty solitudes. I had no food to eat, and to drink I had only the water of the mountain streams. By day no living thing was near to me, and I heard nothing but the noise of the wind, and the mountain streams roaring. But for three nights I heard all round me on the mountain the sounds of a great city: I saw the lights of tall cathedral windows flash momentarily on the peaks, and at times the glimmering lantern of some fortress patrol. And I saw the huge misty outline of the soul of Andelsprutz sitting decked with her ghostly cathedrals, speaking to herself, with her eyes fixed before her in a mad stare, telling of ancient wars. And her confused speech for all those nights upon the mountain was sometimes the voice of traffic, and then of church bells, and then of bugles, but oftenest it was the voice of red war; and it was all incoherent, and she was quite mad."

You can read this story here if you like.