"The Will" by Mary Lavin 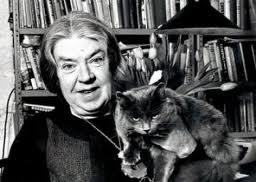 Frank O'Connor features two women writers in his The Lonely Voice:  A Study of the Short Story.   One of them is Katherine Mansfield and he does not really get her at all.   The only female Irish short story writer  is Mary Lavin (1912 to 1996).   I was fascinated to learn that after her first short story was published, she was in her early twenties, her father showed the story to Lord Dunsany who was very impressed and became her literary mentor.  In 1943 she published her first book, a collection of ten short stories about life in rural Ireland

Lavin was  born in the USA to Irish parents who moved all the family back to Ireland when Lavin (1912 to 1996) was ten and she lived the rest of her life there.

"The Will" is one of two short stories by Lavin that Frank O'Connor included in his anthology Classic Irish Short Stories.  "The Will" captures many of the elements I have come to expect in an Irish short story.   A woman has just died and her adult children have just returned from a reading of her will.   The children are proud that they showed no emotion at the funeral.   The mother had some money and she divided it up among her four children, but she left nothing to one of her daughters, the one who actually needed the money most.  It seems the mother turned against her daughter because she married below her economic class and ended up having to keep a rooming house.  Her siblings offer her money, partially out of charity and in part because they are ashamed that their sister keeps a rooming house.   They offer to set her up in a hotel where she could deal with a better class of people.  The sister refuses, she loved her now deceased husband and she turned also away from her mother when she repudiated her choice of a spouse.   I have seen it many times in an Irish short story, lurking below years of restrained emotions are feelings people hardly even know they possess.   We see this at the powerful close of this story.