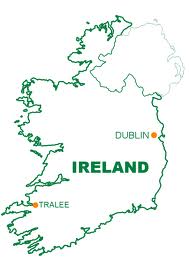 Author of "The Wanderer"
Tralee

If you are interested in participating in ISSM3 please e mail me.
I am probably going to extend the event until April 7 as there are a lot of things  in work for the event.  My great thanks to all who have contributed stories, posts, and Q and A Sessions.  The less the event is just me blathering on the better it will be.

I first became acquainted with the work of Noel O'Regan of Tarlee in County Kerry last year when I read and posted on all of the stories in the great anthology edited by Elizabeth Reapy and published by Doire Press, 30 Under 30:  A Selection of Short Stories by Thirty Young Irish Writers.   I really liked "The Wanderer" a lot.  Here is what I said about it in my post (which you can read here).

Hospitality to wandering strangers in need is a part of the Irish character, especially in the West.   Wandering strangers play an important part in Irish literature from the characters in Waiting on Godot   on down.   In the dialogues of Plato some of the deepest thoughts are expressed by The Stranger, who appears only in two dialogues but both are just before Socrates is going to die.   Strangers are important figures in world literature.   One of the reasons is they are blank canvases that we can paint as we like.   "The Wanderer" is a dark story in this tradition.   This story creates a great atmosphere of fear without us really knowing why.  I do not think it is is right to tell the plot as it is so exciting.  I will say that I do not know whose fate I should be in fear for, was it the woman who invited the wanderer into her house or was it the wanderer who loves the road more than anything else.

There is a lot  packed  in this story.   It is in away a story that arises from the famine or at least a story of a once destroyed culture where traditions do not matter a lot any more, or at least not the new traditions.

I am very happy and honored to be able to post today his very interesting Q and A Session.


Noel O’ Regan was born in Tralee, County Kerry. He is the recipient of a Leonard A. Koval Memorial Prize and was a prize winner in the Writing Spirit Award. He has been shortlisted for numerous other awards, as well as being nominated for a 2013 Pushcart Prize. His short fiction has appeared in journals and anthologies in Ireland and abroad. He lives in London and is short fiction editor for Five Dials.

Q & A Session with Noel O'Regan

Given that it’s Irish short story month, I feel that I should keep the list strictly native, although, even then, it seems near impossible to limit the list to three. The sheer range and consistent brilliance of William Trevor’s work amazes me. I’m not sure if I know a finer writer of sentences than Claire Keegan. Similarly, Philip O’ Ceallaigh’s stories – while divisive – are exceptionally-well crafted. However, on another day, I could throw a different three names at you (for example: Anne Enright, Mike McCormack, Kevin Barry). And the following day might be different again.


Who do you regard as the first modern Irish short story writer?

George Moore. It bothers me a little bit how many people credit Joyce for modernising the Irish short story – yes, Dubliners is a work of art; yes, Joyce is a literary deity – but Moore, with The Untilled Field, was the first Irish short story writer to move away from social realism, towards psychological realism, and he was the first to transfer many of Flaubert’s literary techniques – such as free indirect style – to the Irish short story. Joyce gets enough attention as it is, you know? George Moore deserves more.

(Note added by Mel u-I proposed this question to all of the 30 plus people who have so far returned Q and A Sessions-I actually expected many people to say George Moore who would have been my pick, Frank O'Connors' and probably the pick of James Joyce but only Noel gave him as his answer.)

As you live in London, are you in sympathy with the statement of Oscar Wilde that he never felt Irish until he moved to London?

You are made to feel the weight of your Irishness more when you’re abroad, whether it’s in London or further afield. It’s imposed on you, along with certain expectations – some positive, others negative.

But writers often need space to see their subject clearly, and every Irish writer – whether it’s a conscious or subconscious decision – has Ireland as a subject in their work. Therefore, I feel that being away has allowed me a fresh perspective on home, a clearer viewpoint that, I hope, will benefit my writing.

Why have the Irish produced such a disproportionate to their population number of great writers?

What do you miss most about Ireland when you are in London?

Do you think the very large amount of remains from the Neolithic Period (the highest in the world) in Ireland has shaped the literature and psyche of the country?

The remains probably have shaped the literature and psyche of the country – particularly in the past. Looking at the contemporary scene, however, I think we live a much more immediate life. It seems difficult for us to look back beyond the boom and bust now. But perhaps this is a good thing. I recently read a book about the history of County Kerry and discovered that the McCarthy and FitzGerald clans feuded for centuries in Medieval Ireland. They despised each other. This rivalry culminated in a fierce battle at Callan, near Kenmare, in 1261, where many people from both clans were killed. As I read this, I imagined what it would be like if both families still clung to those ancient grudges, how chaotic that would be (particularly in Kerry, where a lot of McCarthys and FitzGeralds still live). I’m sorry if this example seems facetious; I suppose my point is that maybe it’s a good thing that this current generation doesn’t seem to fix its gaze too far backwards. There’s enough to focus on in the here and now.

In my closing words on your wonderful story, "The Wanderer" I said " It is in away a story that arises from the famine or at least a story of a once destroyed culture where traditions do not matter a lot any more, or at least not the new traditions." Is this relevant?

Something has been destroyed in this story, and the wanderer and woman are both looking to escape that destruction. On one level, it’s a personal destruction, but it also hints at a greater, cultural fall. It’s suggested in the story that this fall relates to the current Crash; however, you can also argue that it echoes back to older and deeper hurts like the Famine. But the characters are too mired in their immediate traumas to be aware of this.

Dublin or London – best city for the Neophyte author?

Option Number Three – Cork. I spent most of my novice years in Cork and found it to be a fantastic place for aspiring writers. Festivals such as the Frank O’ Connor Festival and the Spring Literary Festival brought big literary names to the city, and the weekly poetry events, O’Bheal, meant there was a warm and helpful community of writers ready to offer advice.

How important in shaping the literature of Ireland is its proximity to the sea?

It has had an influence, I think, but it varies from writer to writer. Some writers appear drawn to the sea (Liam O’ Flaherty, Nuala Ní Chonchúir – particularly in her debut collection), while others prefer to remain on dry land. Regarding my own writing, I was once given out to by a major Irish short story writer for my obsession with the sea, and was told to stop drowning my characters (I’ve since stopped doing this).

At the close of my post on your story I said I hoped to post on a collection of your short stories one day. Are you actively writing now?

I am currently working towards a short story collection. I’m not the most prolific, though, Mel, so you may be waiting a while to read it.

Do you feel a bond with other 30 Under 30 Writers?   I would love to see at least a semi-annual follow up anthology-

It’s fantastic to see the response 30 under 30 has received since the launch of the anthology at the Shore Festival in Sligo last November. Liz has done such an amazing job (along with the rest of the Wordlegs team) – not just with this book, but with everything that Wordlegs has achieved over the past couple of years. She’s an inspiration.

I think something of a scene has built up around Wordlegs/Under 30, a community of young writers who are looking to help and support one another – not in a back-slapping way, but in an ambitious and craft-orientated manner – and this can only be a good thing for the future of Irish literature. The Wordlegs/Under 30 project is something I’m incredibly proud to be a part of.

I give my great thanks to Noel O"Regan for taking the time to give us such an informative and insightful set of answers. I hope to read and post on numerous more of his works in the future and will follow his career as best I can from the other side of the world.

Great to get an insight on Noel as he spends a lot of time facilitating other writers.