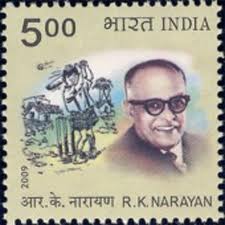 Because of all of the posts still in the works I am keeping ISSM3 open until April 7.  You still have plenty of time to participate and I hope you will-e mail me if interested

In The Lonely Voice  -  A Study of the Short Story (1963) Frank O'Connor said the Irish short story was in danger of being surpassed by Indian writers.   He does not say who he meant but he had to have had R. K. Narayan in mind.  I have read and posted on eight of novels and a good numbers of his short stories.  Jhumpa Lahiri in her introduction to a collection of his short stories she edited lists what she sees as the greatest short story writers of all time.  From Ireland we have Frank O'Connor and from India R. K. Narayan, from America she suggests Flannery O'Connor.

In the Q and A sessions done so far this month, several people list Lahiri as among their favorite contemporary short story writers.  R. K. Narayan wrote exactly the kind of short stories Frank O'Connor admired.  His prose style has a bit of an odd cadence, that of someone writing in a second language, but once you get used to it you will crave more.  Like many other short story writers, he wrote within the confines of the space and requirements of magazine editors.

R. K. Narayan matters a lot to me as a reader and as blogger.  More people come to my blog to read posts on him than any other writer I have posted on, with Katherine Mansfield a close second.  The Economic Times of India has endorsed my posts on him to their high status readers.  Through this I further developed my interest in short stories of the Indian subcontinent and discovered lots of amazing writers.  People from all over the world came to my blog to read these posts, not because they are the best posts but because they are the only ones on these stories.  Indirectly through this I was asked to join the board of directors of a new very exciting literary journal, The Lakeview International Journal of Literature and the Arts.  So this is why Mr. Narayan is joining us today.  New short story writers should read his stories and learn how he creates characters we care about and a real world in a town he created, Malgudi.  (You can watch the TV series of a few years ago based on that in Youtube-even the ones in Hindi are really enjoyable.)   Sometime later in the year I am planning to devote six weeks to the Indian short story (at least) and I will post more on him then, for sure.

"Fellow Feeling" is set in a third class compartment on a train in India.  There car is not real crowded.   Our lead character is a Brahmin, once the ruling elite of India, near him is a man sleeping in his spot on the train.  Then a loud mouthed bully gets on the train and the fun begins.  The man at once hates the Brahmin because of old caste resentments. He blames the Brahmins, who are not supposed to eat meat, for driving up the prize of meat by buying it in secret.   The argument between the two men shows the effects of the decline in the caste system and its lingering power.  The conversation is really a lot of fun to read as the man goes on an on attacking the Brahmins.  Soon things advance and it comes close to a fight.  I will leave the rest of the story untold.

Narayan really makes us feel we are on a third class compartment on the train.  A lot of his stories are about two people seeing the same events in a different way and this story also is about that.  But really it is just a slice of small town life in India 1962 or so.  His characters are perfect, we even understand where the bully is coming from.