"St John of the Miraculous Lake" by Rebecca O'Connor

"St John of the Miraculous Lake" by Rebecca O'Connor 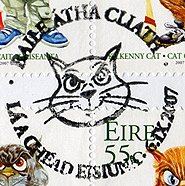 
Event Resources-Links to lots of short stories, from classics to brand new works.

There is no sign up form, no Mr. Linky.   Just let me know by emailing me or leaving a comment anywhere on my blog letting me know of your participation.   Guest posts are very welcome, just contact me about your plans.

"St John of the Miraculous Lake" by Rebecca O'Connor is a story showing us how deeply the forms of the Catholic Mass can sink into the psyche and reverberate in ways never predicted.   It is a dark and mysterious story whose form perfectly mirrors its subject matter.  I hope you will have the pleasure of reading it so I will not tell much of the details of the story.  It centers on a rural family who live near a lake.  The couple had three sons, one of them is developmentally challenged.  He comes through continually listening to the stories of Catholic Saints, to see himself as in the process of becoming a saint.   He sees the waters of the lake near their house as holy water.  There is a very disturbing secret at the heart of this story.   I will quote a bit from it to allow you to develop a feel for the beautiful prose style of O'Connor.


"He never spoke after that. His mother went like a baby, like Jake used to be, with swollen eyelids and blubbery lips. Her tongue grew enormous, and her skin all blotchy. His father was jaundiced-looking. They both terrified him, as did the neighbours with their freshly laundered hankies and soapy hands, lifting him off the ground, lifting him on to their unfamiliar warm laps with tears swilling in their eyes. Ben was too old for sitting on laps. He didn’t want them touching him. He sat away from them – near their mother, always near her – and watched. It was after he had told them we only wanted to show Jake the frogs, only wanted to show him where they lived, take them grown up frogs back home. And after they’d gone to look, and then found Jake in the holy water, and sent him to the hospital, the one that’s closed now, and left him there for good."

One of the things Declan Kiberd talks about in Inventing Ireland:   The Literature of the Modern Nation is the intense relationship between Irish boys (and onto when they mature) to their mothers and this story powerfully illustrates that.

I read this story in a collection edited by O'Connor,  Scealta: Short Stories by Irish Women


REBECCA O’CONNOR was born in Wexford in 1975. Her poetry has been published in The Guardian, Reactions 5 and Poetry Review. She was awarded the Geoffrey Dearmer prize for ‘Best new poet of 2003’, and was shortlisted for the New Writing Ventures Poetry Award 2005. Poems was published by the Wordsworth Trust in 2005, where she was a writer-in-residence. She currently lives in London.