I am very happy to be once again participating in German Literature Month.   Last year I read and posted on short stories by a number of Romantic Era German writers.  In the link below you will find lots of great reading ideas.  Caroline and Lizzy's only real rule is the work must be originally written in German.

The hosts are hoping this year to have an even balance of male to female authors as in prior years it had been very male author dominated. They have a schedule (but you are free to post on  any German work).  Here is the official announcement:

Official Annoucement from The Host of German Literature Month
Caroline and I are delighted to be making this announcement and we hope you’re happy to hear it. The tweets of others as early as January of this year looking forward to German Literature Month convinced us it just had to happen. And so your wishes have come true. This time, however, we are issuing a challenge.
GLM I and II were resounding successes and we want GLM III to follow suit. One thing has concerned us though. Why were the lady writers so grossly under-represented? Only 22% of the authors read in GLM I, reducing to 19% in GLM II, were female. We want to redress that balance. Now we’re not going all Orange prize on you. We don’t want to exclude the great male authors in German(-language) literature. But we are structuring the month so that there are times to focus in on the ladies.
We would, therefore, like the structure of German Literature Month III to look like this.
Week 1: 1-7.11 Ladies Week
Week 2: 8-14.11 Gents Week
Week 3: 15-21.11 Ladies Week
Week 4: 22-28.11 Gents Week
Weekend 29-30.11 Read as you please
Read anything you want: any format, any genre. As long as the works were originally written in German and are reviewed during November, they count for GLM III. The ideal female:male author ratio at the end of the month would be 50:50.
We will also have two readalongs:
7.11 Lizzy will lead a discussion of a title to be determined by public vote. A post will follow shortly with voting options. In the meantime if there’s a title you wish to suggest, written by a female (it will be ladies’ week after all), please leave a comment.
29.11 Caroline will lead a War and Literature discussion of Hans Keilson’s Death of the Adversary.
This year I hope to read in addition to The Tin Drum-
All Quiet on the Western Front by Erich Maria Remarque
The Death of Virgil by Herman Broch
Austerlitz by W. G. Sebald.
I have a collection of old translations of Romantic Era Germsn short stories and I may read more of them.    I will also look to see what is in the forthcoming Best European Fiction 2014 Anthology. I will also look at German language Swiss and Austrian stories I have in anthologies on my IPad from prior years of this series.  I am eagerly looking forward to reading the posts the event will generate and expanding my limited knowledge of German literature.  I urge my readers to consider participating. 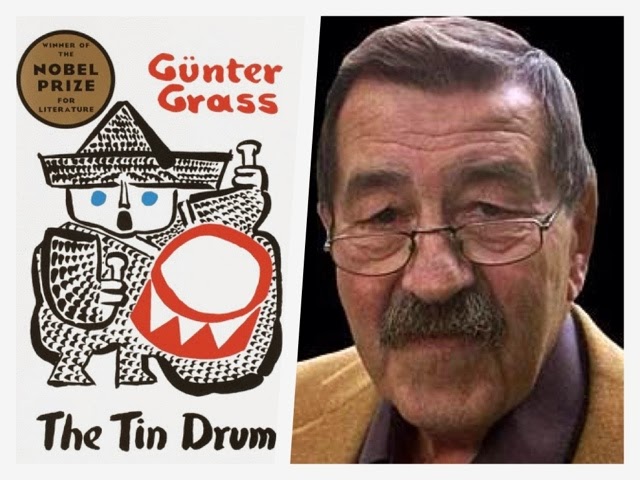 
Günter Wilhelm Grass is a Nobel Prize-winning German author and playwright.
He was born in the Free City of Danzig (now Gdańsk, Poland). Since 1945, he has lived in West Germany (now Germany), but in his fiction he frequently returns to the Danzig of his childhood.
He is best known for his first novel, The Tin Drum, a key text in European magic realism. His works frequently have a strong left wing, socialist political dimension, and Grass has been an active supporter of the Social Democratic Party of Germany. In 2006, Grass caused a controversy with his disclosure of Waffen-SS service during the final months of World War II.

Grass was born in the Free City of Danzig on 16 October 1927, to Willy Grass (1899-1979), a Protestant ethnic German, and Helene Grass (née Knoff, 1898-1954), a Roman Catholic of Kashubian-Polish origin. Grass was raised a Catholic. His parents had a grocery store with an attached apartment in Danzig-Langfuhr (now Gdańsk-Wrzeszcz). He has one sister, who was born in 1930.

Grass attended the Danzig Gymnasium Conradinum. He volunteered for submarine service with the Kriegsmarine "to get out of the confinement he felt as a teenager in his parents' house" which he considered - in a very negative way - civic Catholic lower middle class. In 1943 he became a Luftwaffenhelfer, then he was drafted into the Reichsarbeitsdienst, and in November 1944, shortly after his seventeenth birthday, into the Waffen-SS. The seventeen-year-old Grass saw combat with the 10th SS Panzer Division Frundsberg from February 1945 until he was wounded on 20 April 1945 and sent to an American POW camp.

In 1946 and 1947 he worked in a mine and received a stonemason's education. For many years he studied sculpture and graphics, first at the Kunstakademie Düsseldorf, then at the Universität der Künste Berlin. He also worked as an author and travelled frequently. He married in 1954 and since 1960 has lived in Berlin as well as part-time in Schleswig-Holstein. Divorced in 1978, he remarried in 1979. From 1983 to 1986 he held the presidency of the Berlin Akademie der Künste (Berlin Academy of Arts). From Goodreads

I am very glad I have at last read The Tin Drum by Gunter Grass.   It is often listed among the 100 greatest 20th century novels. It is a long, sometimes it seemed too long, sprawling account of life in Poland during the few years prior to the Nazi domination up through the war years.  The story is told through the very unreliable narration of Oskar Matzerath.  Oscar decided at age three never to get any bigger physically when he heard his father say he would be a grocer when he grew. He tells us the story partially from a mental hospital where he is confined.  Imagine a collaboration between Rabelais, Pynchon, and Hunter Thompson and you can get a feel for this book. It is a complicated challenging work and I am sure much of the symbolism and the Polish and Nazi historical references went pass me unnoticed.  We see how the people in the story, a motley collection of persons close to Oscar including two of his mother's lovers,  deal with and are impacted by the war.  The plot action is very imaginative.  Everyone praises the new translation of Breon Mitchell, which I read, and the quality of the prose is very high.  The novel is grand masterful account of the corruption the war brought to Poland.  Oscar has a weapon in that his voice can shatter all sorts of things.  We are always wondering how accurate are Oscar's perceptions, after all he is in a mental hospital.  I liked this book and I am glad I read it.  It is a challenging book but worth the effort.  It needs to be reread.

Nice review! Your reaction sounds similar to mine when I read the book years ago. I loved it, but it did seem too long in places, and I felt as if some of the references and symbols were passing me by!

Interesting to hear about the new translation - that probably makes a big difference. Mine was a very old copy, so not sure who the translator was.

I read this book about 20 or 25 years ago, and it set me on a Grass kick. I read everything of his that I could put my hands on, and for a long time I would religiously read every new book of his. I confess that I've skipped the last ten years of his career; maybe it's time to reacquaint myself with Gunter. I might read The Flounder again, just for German Lit Month.

Andrew, thanks for stopping by-I did find overly long, maybe that was to make us feel how long the war was

Scott-intetesting to hear of your fascination with Greer-

I read and reviewed this last year, and it's a really demanding book, one that takes a lot of concentration (the German is tricky at times, going round in circles with seemingly never-ending sentences). I enjoyed it, but I'm not sure I'll try it again any time soon ;)

It's been a while since I've read it and only remember I liked it far better than the movie.
I think your reading list for this year's GLM is by far the most ambitious. I'm in awe.
I'm very late in commenting on your posts, I'm sorry. My cat needed surgery last week and it was awful. It took her so long to recover. I'm sure you understand.

Caroline- I hope your cat is ok.