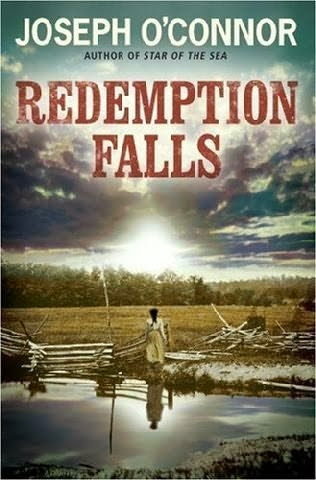 Redemption Falls is the third novel by Joseph O'Connor I have so far read.   It is the most challenging and probably his greatest achievement to date.  My first of his books Star of the Sea was set on a famine ship, 1843, bringing refugees from famine ridden Ireland to New York City. O'Connor let us see the events in the lives of people on the ship that made them embark on this desperate journey.  I really enjoyed this book.  The second of his books I read was Ghost Light.  It's central character is an actress, Molly Allgood, who had what was at the time a scandoulous romance with the Irish playwright John Synge.   Allgood was the leading lady in some of the plays of Synge preformed at the Abbey at Theater.  The romance was doomed by class differences and the disapproval of Synge's mother and others.   Molly way out lived Synge and we learn a lot backstage life and business in the Irish theater.  I was fascinated by this wonderful novel.
The core, linking character is Eliza Mooney.  She was born in New York City around 1847 to famine ship emigrants.  Redemption Falls starts in post Civil War Louisinna in 1865.  It brilliantly brings to life post Civil War Louisinna.  It is not at all a conventional straightforward narration.  It is a collage of posters, letters, official government records, songs, interviews combined with the narrative.  There are two sort of central threads to the story, deeply entertained.  .  It is also the story of the famous Irish patriot and rebel James O'Keefe.  In 1848 the British transported him to Van Diems Land for inciting the Irish to rebel.  He escaped and wound up in New York City.  Eliza Mooney (if you have read another much more famous Irish in the American Civil War novel, Gone With the Wind, then Eliza Mooney would be "white trash" in the eyes if Scarlett O'Hara) sets out across a ravaged country in search of her twelve year old brother who was a drummer boy in the Condererate Army.  She has heard he is in the town of Redeption Falls, located probably in modern Utah or Montana.  James O'Keefe and his fiery ravaging  wife want to adopt the boy and that is the connection.
This is very much also an Irish historical novel.  There are brilliant flashback to Ireland and many of those who we encounter are Irish emigrants.   The horrors of the Civil War are vividly shown.  We meet some amazing people including a slave woman.  In the social hierarchy of the time and place, Irish like Eliza were one small step above freed slaves.
Redeption Falls is a very powerful work of art, much more challenging than the two prior novels by O'Connor I read.  I read this book very slowly over six weeks or so, very much contrary to my normal methods.  I would almost say try his other books first.  If you like historical novels about the American Civil War and the Irish in America, then you should really like this book.
I have now read all of his historical novels.  He has another novel, Inishonen, out in kindle format set in contemporary Ireland and I might read it next year or maybe I will just wait for another historical novel.
Joseph O’Connor was born in Dublin in 1963. He is the author of the novels Cowboys and Indians (short-listed for the Whitbread Prize), Desperadoes , The Salesman , Inishowen , Star of the Sea and Redemption Falls , as well as a number of bestselling works of non-fiction.
He was recently voted ‘Irish Writer of the Decade’ by the readers of Hot Press magazine. He broadcasts a popular weekly radio diary on RTE’s Drivetime With Mary Wilson and writes regularly for The Guardian Review and The Sunday Independent. In 2009 he was the Harman Visiting Professor of Creative Writing at Baruch College, the City University of New York.  From Goodreads