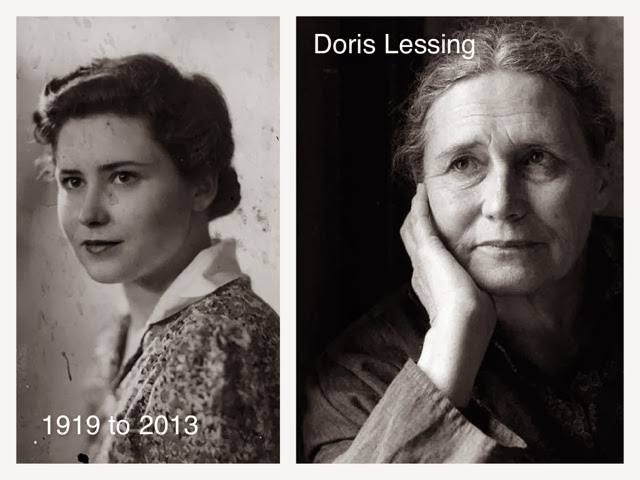 The literary world was saddened a few days ago by the passing of one of our Nobel Prize laureates, Doris Lessing.  I had long planned to read her but with some sixty books and numerous short stories it was hard to find a starting point.  I was glad to see that an excellent short story anthology focusing on English language women writers that I have been slowly working my way through The Story:  Love, Loss, and the Lives of Women -One Hundred Short Stories edited by Victoria Hislop includes two short stories by Doris Lessing.
"A Man and Two Women" is, as one would of course expect, a master work of exquisite prose and deep insight produced by an author of the highest culture.  I would not hesitate to call it a work of high art.  It centers on two couples, both educated and successful in on the surface harmonious seeming relationships.  One of the men has gone from a struggling poverty stricken artist to a highly sought after high priced artist.  The two couples are long term friends.  The heart of this story is in the changing dynamics of the relationships between the four people.  The central "dilemma" in the story arises when the woman, the one married to a business man, acknowledges that her husband does have transitory affairs with other women on his often month long business trips.
About this author
Both of her parents were British: her father, who had been crippled in World War I, was a clerk in the Imperial Bank of Persia; her mother had been a nurse. In 1925, lured by the promise of getting rich through maize farming, the family moved to the British colony in Southern Rhodesia (now Zimbabwe). Like other women writers from southern African who did not graduate from high school (such as Olive Schreiner and Nadine Gordimer), Lessing made herself into a self-educated intellectual.
In 1937 she moved to Salisbury, where she worked as a telephone operator for a year. At nineteen, she married Frank Wisdom, and had two children. A few years later, feeling trapped in a persona that she feared would destroy her, she left her family, remaining in Salisbury. Soon she was drawn to the like-minded members of the Left Book Club, a group of Communists "who read everything, and who did not think it remarkable to read." Gottfried Lessing was a central member of the group; shortly after she joined, they married and had a son.
During the postwar years, Lessing became increasingly disillusioned with the Communist movement, which she left altogether in 1954. By 1949, Lessing had moved to London with her young son. That year, she also published her first novel, The Grass Is Singing, and began her career as a professional writer.
In June 1995 she received an Honorary Degree from Harvard University. Also in 1995, she visited South Africa to see her daughter and grandchildren, and to promote her autobiography. It was her first visit since being forcibly removed in 1956 for her political views. Ironically, she is welcomed now as a writer acclaimed for the very topics for which she was banished 40 years ago.
In 2001 she was awarded the Prince of Asturias Prize in Literature, one of Spain's most important distinctions, for her brilliant literary works in defense of freedom and Third World causes. She also received the David Cohen British Literature Prize.
She was on the shortlist for the first Man Booker International Prize in 2005. In 2007 she was awarded the Nobel Prize for Literature.  From Goodreads