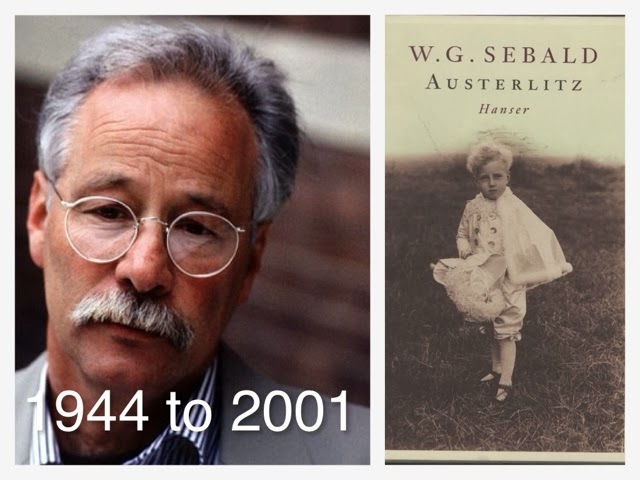 I first acquired Austerlitz by W. G. Sebald in October of last year with the intention of reading it during German Literature Month II, in November, 2012.  I never got around to it last year but now I have.  W. G. Sebald is considered one of the post World War II masters of the German novel.    Of necessity, before I purchase a book I read the Amazon reviews and blog posts from people I know.   I know it might be better in many cases to not be pre-influenced by others opinions but I need to have a good prospect of liking a book before I buy it.  (There are no public libraries in the South Asia mega city that is my home.). Thus I knew the basic plot of Austerlitz before starting the book.  In this case, I think I lost out on the pleasure of trying to understand what was going on in the novel.   There are really only two important characters in Austerlitz.  Jacques Austerlitz, by profession an architectural historian, and his unnamed acquaintance with whom he maintains and often interrupted conversation spanning from 1967 to 1997.  As the narrative unfolds we learn that Austrtlitz was one of many children taken from Praque before WWII to England for safety.   Austerlitz did not become aware of this until he was an adult.  We see Austerlitz trying to put together his history from fragments of memory.  He ends up going to Praque to try uncover his past.
Sebold lets us see Austetlitz discover that his parents were Jewish.  He is brought to think about the horrors of the Nazi occupation.
There are many magnifently things in Austerlitz.  I liked his frequent catalogues and I greatly enjoyed the many photographs.  This is a very powerful work.  I hope to read more works by Sebald in 2014, hopefully one for German Literature IV.

"Flypaper" by Robert Musil
"Mendel the Bibliophile" by Stefan Zweig - I totally love this story.
"The Dead are Silent" by Arthur Schnitzler an entertaining work from 1907
"There Will Be Action" by Heinrich Boll a very good short story by Nobel Prize Winner
Transit by Anne Seghars 1942 very much worth reading
The World of Yesterday by Stefan Zweig - an elegy to a lost culture. 1942