"The Job Application" by Robert Walser. 1907 A post which includes thefull story.

I would wish it on no one to be me.
Only I am capable of bearing myself.
To know so much, to have seen so much, and to say nothing.
A late poem by Robert Walser


The hosts are hoping this year to have an even balance of male to female authors as in prior years it had been very male author dominated. They have a schedule (but you are free to post on  any German work).  Here is the official announcement:

So far I have read and posted on these works, all but Kafka are new to me writers.
The Tin Drum-by Gunther Grass-often listed among 100 greatest 20th century novels.
"The Judgement" by Franz Kafka
All Quiet on the Western Front by Erich Maria Remarque -very powerful war novel
"A Letter from an Unknown Woman" by Stefan Zweig.
The Death of the Adversary by Hans Klein - a work of genius
Chess Game by Stefan  Zweig- a 100 page marvel

I hope to read, among others
The Death of Virgil by Herman Broch
Austerlitz by W. G. Sebald currently reading 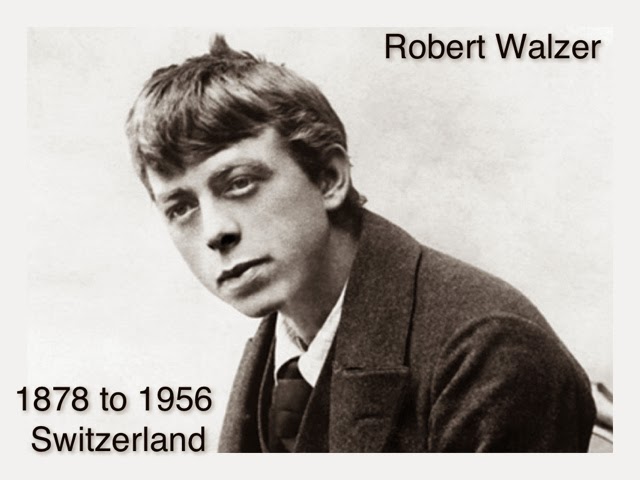 Robert Walzer wrote over 1000 short stories.  In an article in The Guardian I read that Franz Kafka used to scan the newspapers and journals where Walzer's stories were published and would read them aloud to friends.  I don't have any reason to doubt this and I certainly hope Kafka and I shared in the enjoyment of "The Job Application".  Today the very brief work would be classified as flash fiction.  Amazon recommended I purchase a collection of his short stories.  I downloaded the sample and it had a good scholarly introduction but no stories.  Happily Harvard University had placed a story on one of their online journals, maybe left their for students to read.  No translator credit is given.

Walzer's work is said to deal with one of the thought to be core German characteristics, the desire to be perceived as totally obedient to authority, be it a father, a boss, an kaiser or an emperor, a Sargent, or a Furher. "The Job Application", it can be read in under two minutes, is among other things, hilarious in its deadpan humor.  It is just what it says it is, a job application and as I read it I thought this is really the kind of worker governments and big corporations the world over want.

I hope Robert Walzer would not mind and as Harvard gave no translator statement and claimed no copyright I am publishing the full story here.  Let us know how you like it.

THE JOB APPLICATION by Robert Walzer

I am a poor, young, unemployed person in the business field, my name is Wenzel, I am seeking a suitable position, and I take the liberty of asking you, nicely and politely, if perhaps in your airy, bright, amiable rooms such a position might be free. I know that your good firm is large, proud, old, and rich, thus I may yield to the pleasing supposition that a nice, easy, pretty little place would be available, into which, as into a kind of warm cubbyhole, I can slip. I am excellently suited, you should know, to occupy just such a modest haven, for my nature is altogether delicate, and I am essentially a quiet, polite, and dreamy child, who is made to feel cheerful by people thinking of him that he does not ask for much, and allowing him to take possession of a very, very small patch of existence, where he can be useful in his own way and thus feel at ease. A quiet, sweet, small place in the shade has always been the tender substance of all my dreams, and if now the illusions I have about you grow so intense as to make me hope that my dream, young and old, might be transformed into delicious, vivid reality, then you have, in me, the most zealous and most loyal servitor, who will take it as a matter of conscience to discharge precisely and punctually all his duties. Large and difficult tasks I cannot perform, and obligations of a far-ranging sort are too strenuous for my mind. I am not particularly clever, and first and foremost I do not like to strain my intelligence overmuch. I am a dreamer rather than a thinker, a zero rather than a force, dim rather than sharp. Assuredly there exists in your extensive institution, which I imagine to be overflowing with main and subsidiary functions and offices, work of the kind that one can do as in a dream? —I am, to put it frankly, a Chinese; that is to say, a person who deems everything small and modest to be beautiful and pleasing, and to whom all that is big and exacting is fearsome and horrid. I know only the need to feel at my ease, so that each day I can thank God for life’s boon, with all its blessings. The passion to go far in the world is unknown to me. Africa with its deserts is to me not more foreign. Well, so now you know what sort of a person I am. —I write, as you see, a graceful and fluent hand, and you need not imagine me to be entirely without intelligence. My mind is clear, but it refuses to grasp things that are many, or too many by far, shunning them. I am sincere and honest, and I am aware that this signifies precious little in the world in which we live, so I shall be waiting, esteemed gentlemen, to see what it will be your pleasure to reply to your respectful servant, positively drowning in obedience.

Robert Walser (1878–1956) was born into a German-speaking family in Biel, Switzerland. He left school at fourteen and led a wandering, precarious existence while writing his poems, novels, and vast numbers of the “prose pieces” that became his hallmark. In 1933 he was confined to a sanatorium, which marked the end of his writing career. Among Walser’s works available in English are Jakob von Gunten andBerlin Stories (available as NYRB Classics), The Tanners, Microscripts, The Assistant, The Robber,Masquerade and Other Stories, and Speaking to the Rose: Writings, 1912–1932. From The New York of Books.

The next of his works I will read, I hope, is another short story, "The Battle of Sempach"
I have a feeling I will read more by him.