"To be alone: icy, iron terror, foretaste of the grave, forerunner of unpitying death. Oh, whoever has been himself alone can never find another’s loneliness strange."  From Frau Wilke by Robert Walser

German Literature Month November 2013
The hosts are hoping this year to have an even balance of male to female authors as in prior years it had been very male author dominated. They have a schedule (but you are free to post on  any German work).  Here is the official announcement:
So far I have read and posted on these works, all but Kafka are new to me writers.
The Tin Drum-by Gunther Grass
"The Judgement" by Franz Kafka
All Quiet on the Western Front by Erich Maria Remarque -very powerful war novel
"A Letter from an Unknown Woman" by Stefan Zweig.
The Death of the Adversary by Hans Klein - a work of genius
"The Job Application" by Robert Walser
Chess Game by Stefan Zweig-I will read much more of his work
"The Battle of Sempach" by Robert Walser
I hope to read, among others
The Death of Virgil by Herman Broch
Austerlitz by W. G. Sebald 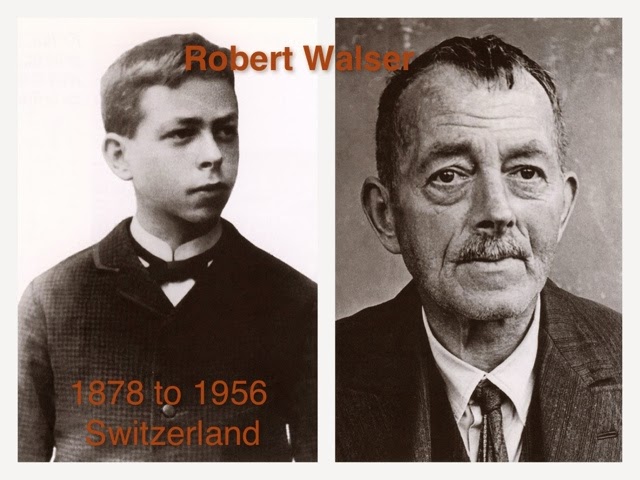 There are lots of decent places to listen to or download podcasts of short stories but only
http://www.miettecast.com/ has the endorsement of The Reading Life.

Miette, whose work I have been following for years has exquisite literary taste and an incredible reading voice and style.  I was very happy to find, though not surprised, to find there were two podcasts of stories by Robert Walser.  (There are a number of other stories on her webpage that qualify for GL III)
My main purpose in this post is to let my readers and those participating in the event of Caroline and Lizzy know about this resource and to keep for myself a record of my encounters with the work of Robert Walser.
"Basta" (1917) takes Miette six minutes to read.  Like the stories I have read it is about a man celebrating his ordinariness.  It is a marvelous story.  Now days people compare Walser to Kafka but there was a time when it was the other way around.  Cosmically it is easy to see this as mocking what many see as the near slavish will to obedience of the culture in which Walser lived.
"Frau Wilke" (reading time 12.5 minutes), translated by ChristopherbMiddleton, is a very beautiful poignant story centering on two very lonely people, Frau Wilke the land Lady of a rooming house and a poet,the narrator of the story who rents a room from her.  I listened to then read the story twice.  Frank O'Connor famously stated the short story at its best is about loneliness.   I know he probably never read Walser, but this story can stand with the best.