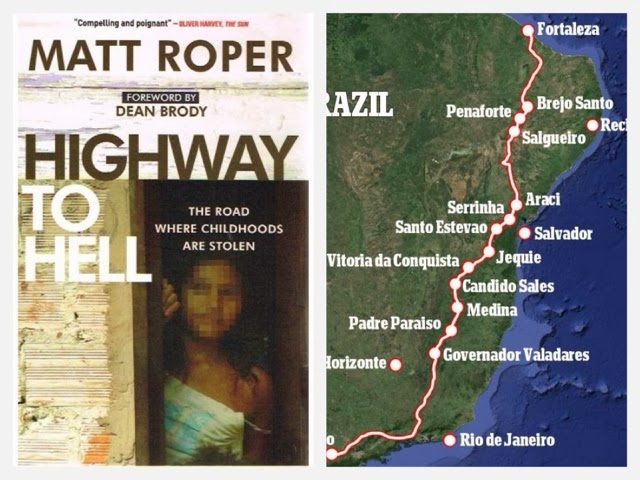 Brazil's 2700 miles long national highway BR 116 is the main north south road in Brazil.  In Matt Roper's deeply disturbing book, Highway to Hell,  we learn the very sordid truth that has lead this road to be called "The Highway to Hell".  It is they story of exploitation of thousands of girls, some as young as nine, as roadside and brothel prostitutes.  It is also the story of the result of the destruction of local culture by international commerce and the terrible impact this has had on the most vulnerable people in this society, young girls.  It is also part of the price to pay for massive deforestation and destruction of small homesteads. The people who have lived along this road for generations (many child prostitutes were the third generation in their family to work the road many were pushed into the business by their grandmothers) are ethnographically a mixture of descendants of Brazilian Indians and African slaves.  They are the products of 100s of years of vicious rapine exploitation.
Prostitution is legal in Brazil but child prostitution is not.  Maybe some of the girls in on BR 116 will end up in an expense sauna in Rio but I think it is only a very few.  As depicted by Roper, prostitution has become so prevalent along BR 116 because of all the long haul truck drivers.  The descriptions from the girls Roper interviewed of climbing into trucks are chilling and every girl knew someone who disappeared working the road.  Maybe she just moved on down the road with a trucker.  Maybe.  When asked why they prostituted themselves many girls said it was to buy fancy cell phones and cheap imitations of fashionable clothes.  This shows the insidious reach of consumerism.  In a kind of circle of death, forests and small farms were destroyed forcing people into shacks along the road.   This was done to make the rich richer.  Then the desperately poor totally uneducated people along the road are bombarded with ads for stuff they cannot afford.  The ads are calculated to appeal to teens.  Then long haul trucks carrying the goods of brazil, often hardwood being shipped out, come along and a market is created for commercial sex with thousands of ready workers.  In the worst families, working the road is seen as the normal thing for a 13 year old girl to do.
The "plot" of the book centers around the efforts of Matt Roper and a friend and their spouses to help as they can some of the girls working the road.  Of course the road prostitution is spreading aids throughout the region as almost all the clients are married.  Child prostitution requires the police turn at least a blind eye and brothels, which often essentially hold girls in bondage, require police and political protection.  This is not an academic sociological study.  It is an up close look at something very evil.
We do meet older women, in their early twenties who survived the road and we meet Brazilians trying to help.  We get to know some of the girls and part of the heartbreak of this book is how normal they seem.  Imagine a world where your mother pushes you to get a summer job, not in the mall but sexually servicing truck drivers (truck drivers in Brazil come off really poorly here) you meet while standing out on the road.  By no means are all the girls pushed into it, many hear of the big to them money they can make and willingly do it.  We meet a heart broken father with no means to stop his teenage daughters from working the road.
A few girls can be helped by efforts of good people like Matt Roper but I do not personally see any real changes coming.
I was provided a review copy of this book
,