All Quiet on the Western Front by Erich Maria Remarque 1928 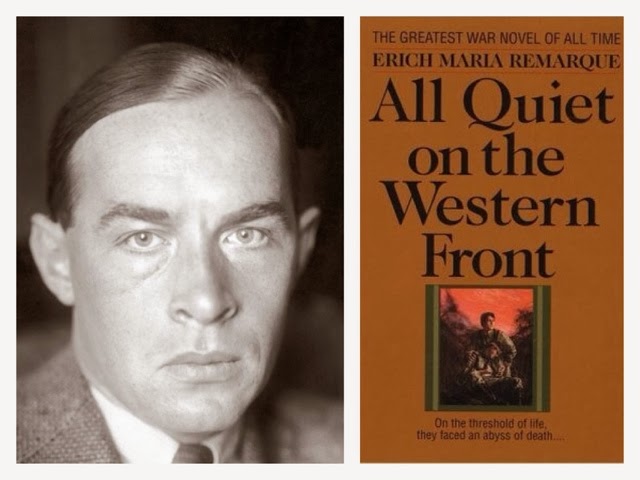 I am very happy to be once again participating in German Literature Month.   Last year I read and posted on short stories by a number of Romantic Era German writers.  In the link below you will find lots of great reading ideas.  Caroline and Lizzy's only real rule is the work must be originally written in German.

The hosts are hoping this year to have an even balance of male to female authors as in prior years it had been very male author dominated. They have a schedule (but you are free to post on  any German work).  Here is the official announcement:

Official Annoucement from The Host of German Literature Month
Caroline and I are delighted to be making this announcement and we hope you’re happy to hear it. The tweets of others as early as January of this year looking forward to German Literature Month convinced us it just had to happen. And so your wishes have come true. This time, however, we are issuing a challenge.
GLM I and II were resounding successes and we want GLM III to follow suit. One thing has concerned us though. Why were the lady writers so grossly under-represented? Only 22% of the authors read in GLM I, reducing to 19% in GLM II, were female. We want to redress that balance. Now we’re not going all Orange prize on you. We don’t want to exclude the great male authors in German(-language) literature. But we are structuring the month so that there are times to focus in on the ladies.
We would, therefore, like the structure of German Literature Month III to look like this.
Week 1: 1-7.11 Ladies Week
Week 2: 8-14.11 Gents Week
Week 3: 15-21.11 Ladies Week
Week 4: 22-28.11 Gents Week
Weekend 29-30.11 Read as you please
Read anything you want: any format, any genre. As long as the works were originally written in German and are reviewed during November, they count for GLM III. The ideal female:male author ratio at the end of the month would be 50:50.
We will also have two readalongs:
7.11 Lizzy will lead a discussion of a title to be determined by public vote. A post will follow shortly with voting options. In the meantime if there’s a title you wish to suggest, written by a female (it will be ladies’ week after all), please leave a comment.
29.11 Caroline will lead a War and Literature discussion of Hans Keilson’s Death of the Adversary.
My first read for the event was The Tin Drum by Gunther Grass
My second is All Quiet on the Western Front by Erich Maria Remarque
I hope also to read:
The Death of Virgil by Herman Broch
Austerlitz by W. G. Sebald.
I have a collection of old translations of Romantic Era Germsn short stories and I may read more of them.    I will also look to see what is in the forthcoming Best European Fiction 2014 Anthology. I will also look at German language Swiss and Austrian stories I have in anthologies on my IPad from prior years of this series.  I am eagerly looking forward to reading the posts the event will generate and expanding my limited knowledge of German literature.  I urge my readers to consider participating.

On the cover of my copy of All Quiet on the Western Front it is said to be greatest war novel of all time. I have not read enough war novels to dispute or verify this claim but I think the foot soldiers in The Iliad would see little has changed in four thousand or so years.  This is a great novel and it well might be the best war novel ever written.  It is told in the first person by a twenty year old German WW I private.  I admit part of the power of the book for me was the way it forced me to see the Germans soldiers in a sympathetic way.  My ancestors fought against the Germans twice in the Twentieth Century.  My uncle, for whom I was named, died at 23 in WWII.

Historians see WW One as among the very most senseless large scale wars.  The monarchs of the counties involved were all related by blood or marriage.  There were no large ideological differences, no serious territorial issues.  It set the stage for WW Two and the Holocaust.

When the novel starts there are 150 soldiers in the company, on armistice day four years later only seven are left and nearly all have serious wounds.  This novel brings the day to day existence of the foot soldier to life in a painfully vivid fashion.  We are made to feel it was like to be in the trenches. This is very much an anti-war novel, there is no glory in this novel, no patriotism, no jingoism.  The Germans know they cannot win against the materially richer English and Americans., There are numerous deeply moving moments in the novel.

All Quiet on the Western Front is a masterwork, flawless. I read a translation by A. W. Wheen.

Erich Maria Remarque is one of the best known and most widely read authors of German literature in the twentieth century.

Remarque's biography is essentially marked and his writing fundamentally influenced by German history of the twentieth century: Childhood and youth in imperial Osnabrück, World War I, the Weimar Republic, and most of all his exile in Switzerland and the United States. With the novel All Quiet On the Western Front, first published in 1929, Remarque attained world-wide recognition continuing today.