Short Story Week begins today.   The Irish are the acknowledged masters of this form.  This year, sponsored by Writing.ie, there are six finalists for Irish Short Story of The Year.  All can thankfully be read for free online.  Two of the six writers have graciously done Q and A sessions on The Reading Life, Danielle McClaughlin and Billy O'Callaghan.  I am looking forward to first for me readings of the other four writers.

In alphabetical order (click on each title for further information) the six shortlisted short stories are:

HOW I BEAT THE DEVIL by PAUL MURRAY (From Town and Country: New Irish Short Stories – Faber & Faber)

Read the individual entries here and click to go to the Irish Book Awards website to vote for your favourite! 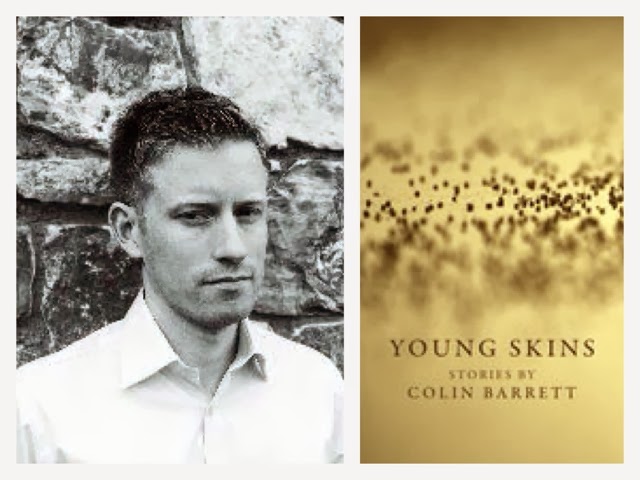 "BAIT" by COLIN BARRETT (From Young Skins – Stinging Fly Press)
Colin Barrett's first collection of short stories, Young Skins, is receiving a lot of very favorable attention. Published by the Stinging Fly, publishers in the USA and UK will soon be producing editions.  I have talked previously about how many contemporary Irish writers, for example Roddy Doyle and Desmond Hogan, set many of their works of fiction  on the mean streets of contemporary urban Ireland.  The stories try to show how people, often focusing on people in their late teens and early twenties try to cope with the decline of the Irish economy, the pervasiveness of alcohol abuse, and the break down of traditional values and family structures.  Many of the male characters are prone to violence, quick to take offense and see women their age just as sex objects.  Under this lies the spectrum of colonialism (I know many think seeing Irish literature as a post colonial cultural entity is dated but I see it more and more.). Under the posturing macho tough guy, you will find a man heavily compensated for the issues foisted on the Irish by 100s of years of subservience to colonial rulers.  I see this as much in fiction from 2013 as 1913 or 1813.
"Bait", is a superbly written and plotted story with interesting characters and flawless dialect without a lot of Irish slang which outsiders like me have to Google, that centers on two young men from a housing estate in an Irish city.  As I understand it, and my understanding might need correction, a housing estate is a planned development mostly with working class residents, not a place where a Trinity full professor or a Guinness executive would live.  As the story opens one man picks up his friend, a pool hustler.  They are in the way to a pub where the pool player will challenge all comers to a bet on beating him.  I liked it when I learned he was smart enough to lose once and a while.  Being good at pool (billiards) is a mark of manhood.  They stop off to pick up an old girl friend of the pool player and her girl friend, Jenny.  Jenny tells the lads that they are out "trolling for cock".  So I guess even the ladies are macho on these mean streets.  Many writers of fiction and nonfiction have written about the sexual reticence of the Irish.  (Studies bear out a lower level of sexual activity among Irish youth than those in other European countries.  Not long ago Irish women with multiple sexual partners could be confined to a mental hospital.  The Irish also have a very low rate of out of marriage births so I see much of the interplay as just posturing or people doing what they think others will expect of them). I see this as part of what bait is about.
I don't want to tell too much of the plot as it is exciting with some good action.  There are bar room tough guys, one of the girls is six foot two, maybe there is some furtive lean her against a tree in the woods sex, and there is a bit of a revelation.
"Bait" is a wonderful story.  I read it yesterday and today.  I would love to read the full collection from which it comes, Young Skins.
To give you a further idea of the subject matters of Barrett's story and their critical reception, I will take the liberty of sharing with you a bit of the publisher's webpage.
Colin Barrett was born in 1982 and grew up in County Mayo. In 2009 he completed his MA in Creative Writing at University College Dublin and was awarded the Penguin Ireland Prize. His work has been published in The Stinging Fly magazine and in the anthologies, Sharp Sticks, Driven Nails (Stinging Fly Press, 2010) and Town and Country (Faber and Faber, 2013).

Colin received bursaries from the Arts Council in 2011 and 2013. This is his first collection of stories.

Colin has been shortlisted for two prizes at the 2013 BGE Irish Book Awards — the The Sunday Independent Newcomer of the Year and the Writing.ie Short Story of the Year for 'Bait', which appears in Young Skins. Prizes are awarded by public vote, and voting ends at midnight on November 21st.

'a stunning debut… all seven tales converge towards one singular theme: the failure constantly lurking in the shadows of the human condition. The timeless nature of each story means this collection can – and will – be read many years from now.’

It isn’t necessarily the job of fiction writers to explain our social landscape, but sometimes the best of them do. Colin Barrett’s short, brutal collection of stories presents clearly and without sentimentality a picture of the young Irish small-town male, in his current crisis of hopelessness and alienation.

These stories, exploring male friendship and often unrequited love convey the atmosphere of post-boom Ireland quite wonderfully. With little lucrative employment, the protagonists struggle on as best they can, seeing no way out…

I loved these stories, and empathised with every one of the protagonists. I like the way they challenge the readers’ prejudices and leave them wanting more. The writing is superlative. Every sentence counts. We’ll be hearing a lot more from Colin Barrett.

Colin Barrett’s story collection, seven tales set in the grim surrounds of a fictional Mayo town, is a truly accomplished debut. The stories are no comforting pastoral—instead, we meet a cast of young men and women trapped in a variety of hopeless situations, some turbulent and messy, others of the quiet-desperation variety. In ‘Diamonds’, a recovering alcoholic takes up a job as grounds-keeper in his old school until he falls off the wagon; in a couple of stories, outsiders visit for a period—such as the students marking time in a summer job in both ‘The Moon’ and the excellent ‘Stand Your Skin’—only to clear out again, leaving those they were involved with ever more conscious of the limits of their world. There’s quite an overlap in tone with Kevin Barry, but Barrett is no pale imitator. His writing is confident and gritty—and every now and then he hits the reader with such a perfect turn of phrase it underscores a serious talent. Don’t bank on being uplifted by these gnarly portraits of rural Irish life, but do expect to be very impressed by the power of Barrett’s writing.