"The Family House" by Elspath Davie 1972 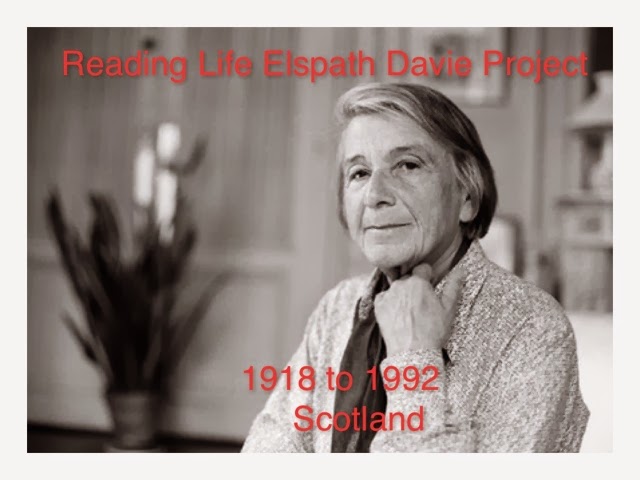 In her obituary in The Telegraph Elspath Davie is described as a neglected master of the short story, little read anymore.  There are no book blog posts on her work other than the three prior ones I have done.  Who gets read, taught and bought is as much impacted by business and trendiness as it is by quality.  I have a posthumous collection of thirty nine of her stories, The Man Who Wanted to Smell Books and other Stories (2011).  I love having this collection but the editor did not include publication dates for the stories which I find a very bad but too common practice.  I do not know if it comes from laziness but I hope future editors will do a better job on anthologies.  I am going to read all these stories, I don't know if I will post on them all or not.  Part of me says why do posts I can predict nearly no one will read but you never know.   Long ago I wrote posts on Japanese WWII authors that had no mention on the net in English and they since have gotten steady but slow readership since then.
Have you ever seen reality TV shows about hoarders, people who cannot bare to throw away anything?  "The Family House" is about a Scottish family of hoarders, not dysfunctional mental cases like we see on TV, but a perfectly respectable normally seeming   family of five, three brothers and two sisters.  They are adults, never married and childless.  The men work in offices,the sisters take care of the house, which being very old requires a lot of maintenance.  They inherited the house, quite big, from an aunt.  It has been in the family for generations.  The house is totally neat and organized but it is full of the stuff of generations. One day the oldest sister, we never learn much about the brothers, goes in the attic looking for something and hurts her foot when an old clock falls on it. She takes to her bed and refuses to get out even after the family doctor tells her she is fine.  She says she needs a rest from the burden of so much stuff.  (spoiler alert).  Her frustration starts an epic rush of fires in which old clothes and generations worth of letters are burned.  Soon the brothers are throwing lots of household items on the fire.  In one very funny scene, the sisters find three bread crumb brushes, never used in decades.  After debating on the need for three brushes to deal with bread crumbs, two go into the fire. The spell or power of the old house and generations of guilt are broken.  In  frenzy they sell of or send to the dump (the trash collectors go wild with joy when they contemplate the money they will make from what the family is throwing out) ninety percent of the things in the house.  In the event others may read this story, I will leave the denouement of the plot unrevealed.
This is a very good story, the characters are not well developed but I think that to show how the house and their heritage prevented them from developing strong full personalities.
Do you have a favorite short story writers that seems little read?

Elspeth Davie, née Dryer, was born in Kilmarnock in 1918. Her father was a Scottish minister; her mother was Canadian. Although she spent much of her childhood in England, she returned to Scotland to study at Edinburgh University and Art College. Rather than complete her degree, she trained as a teacher and taught art in Scotland and Northern Ireland. It was there that she met her husband, the philosopher George Elder Davie, whom she married in 1944.

She started writing stories for literature journals such as the Transatlantic Review, Cornhill and London Magazine, and her first novel,Providings, was published in 1965. Several other novels followed, but it was for her short stories that Davie was best known. Her anthologies included The Spark, The High Tide Talker, and The Night of Funny Hats.

In 1977 Elspie Davie won a Scottish Arts Council Award, and in the following year she won the Katherine Mansfield Prize. Her final collection, Death of a Doctor, was published in 1992. Her stories typically had ordinary settings into which extraordinary characters and events took place.

Elspeth Davie died in Edinburgh in 1995.