I have enjoyed participating in German Literature Month hosted by Caroline of Beauty is a Sleep Cat and Lizzy of Lizzy's Literary Life.    So far I have posted on a  "Germelshausen" by Friedrich Gerstacker (from which the plot of the movie Brigadoon was lifted and reset in Scotland) and short stories by two Nobel Laureates, Thomas Mann and Hermann Hesse. 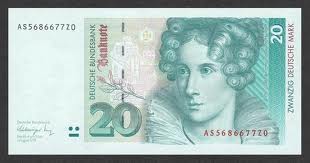 This morning I found a great resource for those interested in reading German short stories from the 19th century and I want to share it anyone who might be interested.   (I know it is a bit late in November but there is always next year!)


The web page 19th Century German Short Stories looks like a great resource.   It has about forty 19th century short stories by German writers with both the original text and a translation into English.   It also has a number of other interesting and potential pedagogically valuable resources.


I also want to post briefly on a story by a well regarded poet , Annette von Droste-Hulshoff (1797 to 1848 as there seems a shortage of female writers represented so far this month.


She was born into an aristocratic Catholic family and was educated by private tutors.   Her primary focus as a writer was on her poetry but she also wrote well regarded shorter fiction.


The title "The Jew's Beech Tree" and in fact elements of the story may appear to be evidence of anti-Semitism.   I think this is really not accurate or entirely fair as I think the story is an attack on such attitudes.   Nevertheless lines like these make one wonder what was in the mind of the author.


""If he took the money from Aaron, you may be sure the accursed Jew had swindled him of it before. Hülsmeyer is a decent, proper man, and the Jews are all rogues."


"The place shook with laughter; many had followed into the yard. "seize the Jew! weigh him against a pig!" shouted some; others had become serious. "Frederick looked as white as a sheet," said one old woman, and the crowd parted as the gentry's carriage drove out of the yard."


"the dog of a Jew hung himself with one of his own garters. What do you say to that? Aaron is certainly a common Jewish name, etc."


The story is an interesting look at life in a small village.   It also deals with conflicts of settled peasants with forest rangers (unsettled men who live from killing the animals in the forest).


The central plot action turns on whether or not a young man of eighteen killed a Jew or not.   The story ends with a quotation of a Jewish curse.


It is hard to see in this story what is in the author's mind.   At the least the story is worth reading to get a feel for how important a role Jews played in the mind set of the villagers who blamed them for everything and to see the attitudes of people in the era of the story.

This is a short story I personally like a lot and thank also for the link. That looks like a great resource. When reviewing Effi Briest Fay commented on some anti-Semitic elements and I thought immediately of this story and Ricarda Huch's Das Judengrab (The Jew's Grave - but has maybe not been translated) .
It makes us feel very uncomfortable bearing in mind what has happened. As a matter of fact there are many instances in older novels with decidedly outspoken aniti-Semitism. I don't know Droste-Hüshoff's position but I know as much as I enjoyed the book there was a question mark.

A great resource Mel, thanks for the info.

All the antisemitic remarks made in the novella are from characters' dialogue. The story is about injustice in various different forms and one of these forms is intolerance against Jews. I am pretty sure that Droste-Hülschoff wasn't antisemitic but was actually pointing out the dangers of this kind of narrow mindedness.

Terra, as I noted in my post, I see the story as an attack on anti-semitism