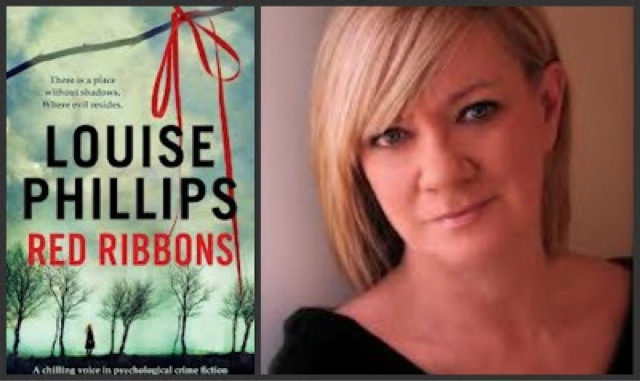 Normally I read several books at one time.   Yesterday I took Louise Phillips' novel Red Ribbons with me to our community pool, thinking I will start it after my swim.   I sat down briefly in a pool side cabana and a monsoon rain began.  I could not get back in the club house without being drenched so I started reading. Three hours of rain went but I was so drawn into the incredibly well done powerfully absorbing crime story, set in Dublin, that I barely noticed the time and rain.   It is compulsive reading.
The plot action begins when a young girl is found murdered. The killer put red ribbons in her hair. We also meet a woman, Ellie, who was placed in a mental hospital 15 years ago for burning down her trailer with her 12 year old daughter inside. This begins as a seemingly separate subplot and a lot of the fun of the novel is in wondering how this is connected to the murders.  Soon another girl is killed and a massive hunt for the killer begins. It was fascinating to be an insider on this and to get to know a profiler and some detectives.   We know early who the killer is and we see the events also through his eyes.
There are lots of exciting plot twists and I never could have predicted the very satisfying close of this marvelous novel.   The level of the prose is very high.  I completely endorse Red Ribbons to anyone one who likes well written suspense and crime novels.   I am really looking forward to reading her second novel, drawing rave reviews, The Doll's House.
Author Bio (from her webpage)
Louise Phillips returned to writing after a 20 year gap spent raising her family, managing a successful family business, and working in banking. Quickly selected by Dermot Bolger as an emerging talent, Louise went on to win the 2009 Jonathan Swift Award and in 2011 she was a winner in the Irish Writers’ Centre Lonely Voice Platform, as well as being short-listed for Bridport UK Prize, the Molly Keane Memorial Award, and the RTÉ Guide/Penguin Short Story Competition. In 2012 Louise was awarded an Arts bursary for literature from South County Dublin Arts. Louise's psychological crime novel, Red Ribbons, is published by Hachette Books Ireland, and has been shortlisted for the Best Irish Crime Novel of the Year 2012. Her second novel, The Doll's House, will be published in 2013. Other publishing credits include many literary journals and anthologies, including New Island's County Lines.
http://rereadinglives.blogspot.com/2013/03/louise-phillips-question-and-answer.html.
A Q and A with Louise Philips
Mel u