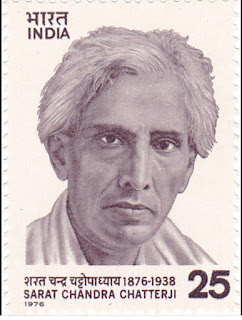 I was initially made aware of this very valuable edition to pre-idependence Short Stories by  Mitali Chakravarty,  in a Facebook Post.

As story opens a funeral procession for the wife of a very rich Brahmin is proceeding with her body toward her funeral pyre.  Chattopadhyay opening description made me feel I was back in Kolkata in 1926, part of the crowd marveling at the sumptous procession.  I share a bit to give you  an oppurtunity to time travel.

“Old Mukhopadhyay moshai*, grown extremely wealthy from a flourishing business in rice and paddy, had four sons and three daughters — all with children of their own. Sons-in-law, grandchildren, neighbours and servants filled the rooms in a measure that befitted not a house of death but of jubilation. Men, women and children from the entire village crowded at the gates in the hope of catching a glimpse of the splendid funeral procession which would accompany the dead woman to her final resting place. Her weeping daughters lined her parting with sindoor and covered her feet with alta*. Her daughters-in-law dressed her in a resplendent new sari and adorned her brow with sandal paste.  Then, wiping the last traces of dust from her feet with their sari ends, touched them reverently to their foreheads. Flowers, garlands and basil leaves, clouds of fragrant incense smoke and the resounding clamour and bustle turned the day of mourning into a joyous replica of the one, fifty years ago, when the mistress of the great house had first set out on her ceremonial journey to her husband’s home.”

Kangali, a woman from the Duley Caste, an untouchable, is enraptured by the procession. Per my Research   the Duley Caste, part of the Badgi or Bagris group of castes, were traditionally tenders of cattle or fishermen, now numbering about 200,000 members. Kengali wishes she could join in and throw a burning twig on pyre but she knows she cannot. She has deeply internalized the consequences of being an untouchable, seeing herself as a being of no worth, deserving of nothing.  There is deep sadness in this:

“She had been on her way to the weekly haat* with a few aubergines she had picked from the bushes outside her hut when the marvellous spectacle caught her eyes, leaving her spellbound. She forgot the aubergines bundled in a corner of her sari. Forgotten, too, were her hopes of selling them and coming home with a few coins. Brushing away the tears from her streaming eyes she followed the crowd to the cremation ghat that stood on a bank of the Garud river. Standing on a mound, a little way off, she looked on with eager eyes at the huge wooden logs, stacks of sandal wood, ghee, honey, camphor and incense that lay beside the bier. She dared not go any closer. She was an untouchable, a Duley by caste, and even her shadow was shunned by the others.”

Her son sees Kangali is distracted and chides her to get back to work.

I shall leave the close of this story for you to discover.  I read it three times.

I hope i can read more of Sarat Chandra Chattopadhyay’s stories.

Sarat Chandra Chattopadhyay or Sarat Chandra Chatterjee (15 September 1876 – 16 January 1938), was a Bengali novelist and short story writer of the early 20th century. Most of his works deal with the contemporary social practices that prevailed in Bengal. He often addressed social ills with his writing and in that sense was a reformer in his heart.

Aruna Chakravarti (India) has been the principal of a prestigious women’s college of Delhi University for ten years. She is also a well-known academic, creative writer and translator with fourteen published books on record. Her novels, The Inheritors, Jorasanko, Daughters of Jorasanko, have sold widely and received rave reviews. Suralakshmi Villa is her fifteenth book. She has also received awards such as the Vaitalik Award, Sahitya Akademi Award and Sarat Puraskar for her translations.

From The story link.

I offer my thanks to  Mitali Chakravarty  for Publishing  this story

She is the founding editor of the Borderless Journal.

Mitali Chakravarty has been writing from the age of eight. She started her professional career as a journalist in The Times of India.  Her bylines have appeared in The Statesman, The Times of India, The Hindustan Times, The Pioneer, The Daily Star and more journals. Her poetry and prose have been published online and as part of numerous hardcopy anthologies. Some of her poetry has been translated to Nepali and German. Mitali also translates from Bengali and Hindi to English. She has published a humorous book of essays on living in China where she spent eight years, In the Land of Dragons . From borderlessjournal.COM

I took a long look at The Borderless Journal.   It already has lots of Short stories i hope to read and much more in just a few months of publication .

Here is their  Mission Statement

“Borders were drawn through history dividing mankind into smaller more manageable divisions that could be ruled and led. Borderless is a celebration of the human spirit that soars exploring and developing links beyond all the borders that exist in today’s world.

It is a literary journal to connect all writers and readers beyond the bonds of money, nationality, rituals and cultures… to a world of ideals. We look for any positive input — humour, poetry, prose. There are no boundaries to human imagination and thought and that is what we are set to explore”

Reading fiction from the POV of someone declared an "untouchable" allows us to develop compassion in a vital and powerful way: thanks for sharing the link to this writer and this story in particular!